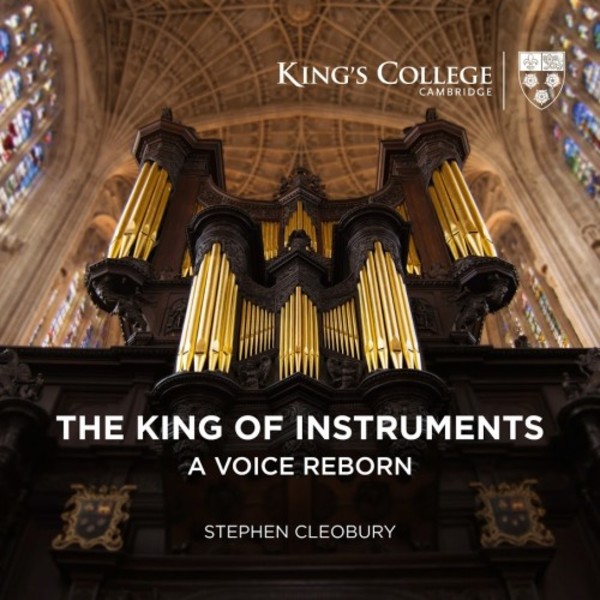 The King of Instruments: A Voice Reborn

The Harrison & Harrison organ in Kings College Chapel is, like the College Choir, famous the world over. The organ case with gilded pipework is a striking feature of nearly every depiction of the interior of the Chapel, while the instantly recognisable sounds of the instrument have become inextricably associated with those of the Choir.

In January 2016 the organ and all its 4,300 pipes was removed from Kings College Chapel for the most significant restoration since the 1960s. Just nine months later, the project was completed with the famous organ secured for future generations. Recorded just a few months later, this album celebrates its voice reborn, in a programme that shows off this magnificent instrument at its very best.

A former president of the Royal College of Organists, Stephen Cleobury gives regular performances in the weekly recitals at the Kings Chapel, while his recordings have been championed for their virtuosity and musical insight. This release joins other critically-acclaimed recordings from Kings College, Cambridge, notably Organ Works: Liszt, Reubke, Mendelssohn, which was the first [Dolby Atmos] surround sound recording of this great organ. Gramophone praised Cleoburys playing: If you are not at the top of your game, there is little point in tackling the ferociously demanding Liszt and Reubke works - and Stephen Cleobury is on peak form.

More information about the 2016 restoration of the organ in Kings College Chapel can be found at: bit.ly/organrestoration2016

Theres not a chorister in sight (or earshot) on the latest disc from Kings College Cambridges own label. Instead, it is the Chapels organ that takes centre stage  something that would have been impossible a year ago, when it lay in pieces during a major restoration project. Now, once again, it is astride the great rood screen, where it has been positioned since about 1630, possibly the Chapel interiors most striking feature after the glorious Perpendicular fan vaulting. The organ in its modern form is largely a Harrison & Harrison instrument of 1934, and in the late 2000s it became clear that substantial work would be required on it, carried out by the same firm.

The Chapels annual Christmas commitments meant that a restoration usually requiring a year-and-a-half would have to be squeezed into a period of just nine months. With work starting in January 2016, over 4000 pipes were removed for a deep clean, leaving an empty organ case (extraordinary photos of which are included in the lavishly illustrated booklet). A new internal structure was installed, 80-year-old soundboards were replaced, new actions built, and wind and electrical systems overhauled.

In January 2017, just weeks after the restoration had been signed off, Stephen Cleobury, the Colleges Director of Music since 1982, put the instrument through its paces for this thoughtfully organised and wide-ranging recital disc. Six chorale preludes by JS Bach (three from Clavierübung III and three from the Orgelbüchlein) demonstrate the organs strengths in a variety of German Baroque organo pleno registrations, including particularly fine use of mutation stops in the great O Mensch, bewein dein Sünde groß, BWV 630.

The two groups of chorale preludes frame a trio of works from the romantic repertoire: Mendelssohns F minor Organ Sonata, op.65 no.1, pays tribute to the Leipzig cantor, but also affords the opportunity to show off the flute registers in the second movement Adagio as well as the swell oboe and solo cor anglais in the following recitativo. Harvey Graces Resurgam features a wide range of colours and dynamics, including the solo tuba, while César Francks celebrated Pièce héroïque employs a variety of sweet reed stops in the French tradition.

Bookending the recital are works by two of Cleoburys close colleagues. Simon Prestons Alleluyas (1965) combines the patent influence of Messiaen with a certain English jauntiness, and the disc ends with the first recording of George Bakers Procession Royale, written especially for Cleobury, bringing proceedings to a majestic conclusion.

All the pieces are performed with Cleoburys trademark combination of technical finesse and unfailing good taste, and the organs huge variety of colours is brilliantly caught within a challenging acoustic by engineer Arne Akselberg and his team. Theres a written introduction by Cleobury himself; extensive notes on the instrument, the restoration project and the music by his wife, Emma; and full details of the revised specification. A wide selection of colour photographs (taken before, during and after the work) ensure a feast for the eyes as well! A thoroughly recommendable disc, ideal for all organ lovers.