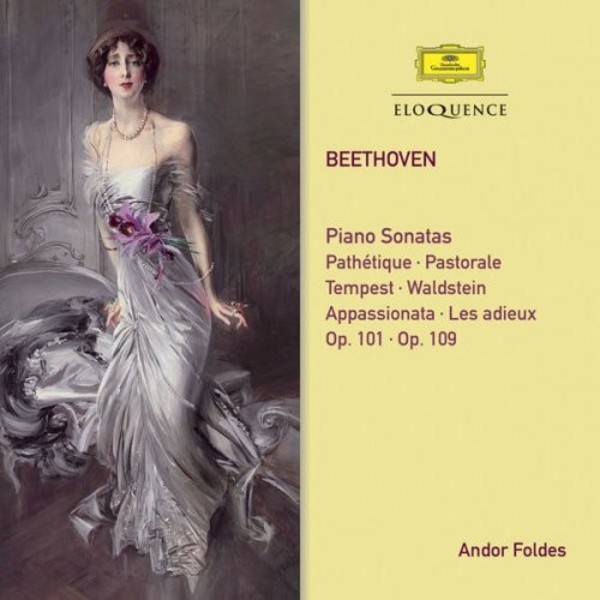 A couple of years after making these Beethoven recordings for Deutsche Grammophon, Andor Foldes remarked that I am not a prodigy and I am not an octogenarian. I just have to be good. Such plain-spoken reserve might be considered characteristically Hungarian. Eloquence has already released Foldess long-esteemed albums of his fellow countrymen Bartók (ELQ4807100) and Kodály (ELQ4807099).

However, he was best-known in English-speaking countries for his performances, and latterly his no-nonsense teaching, of Beethoven. This 2-CD release of sonatas is one of three issues of his recordings of the composers music for Deutsche Grammophon, made in the late 1950s and early 1960s. (Two available this month, one in May.)

The special grasp Foldes had of Beethovens idiom was recognised early in life. At sixteen, he played the Pathétique Sonata to Emil von Sauer, whose own virtuoso days were long behind him. At length, von Sauer rose from his seat, went over to the boy and kissed him on the forehead. My son, said von Sauer to Foldes, when I was your age I became a student of Liszt. He kissed me on the forehead after my first lesson, saying, Take good care of this kiss  it comes from Beethoven, who gave it to me after hearing me play. I have waited for years to pass on this sacred heritage, and now I feel you deserve it. The Pathétique is here, of course, enriched by a further three decades insight and experience; so too are several of the best-known named sonatas as well as two late ones, Op.101 and Op.109.

Andor Foldes knows just what he is at Les Adieux receives a wholly delightful performance [he] exactly catches the mood This is playing of great distinction. - Gramophone, July 1962

Listening to it for the first time [Op.109], I was pleased to recognise familiar virtues: clear and limpid tone, for example, crisp textures and the technical ability to get round all the awkward corners of Beethovens piano writing with ease and naturalness. - Gramophone, December 1961