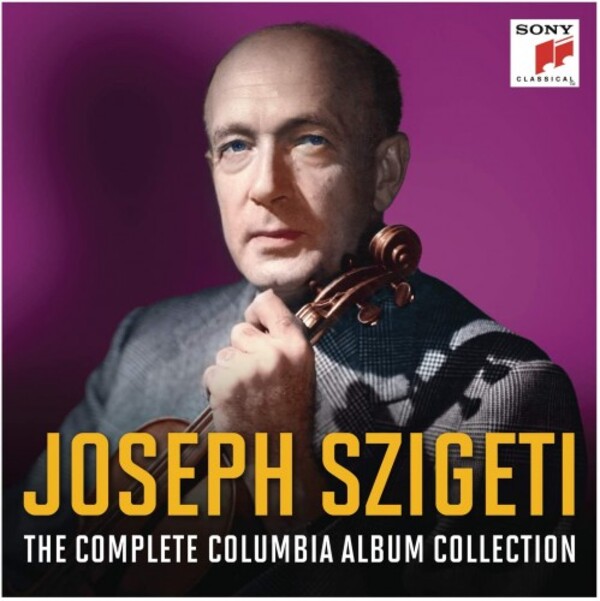 Brandenburg Concerto no.5 in D major, BWV1050
Concerto for flute, violin and harpsichord in A minor, BWV1044
Partita for solo violin no.1 in B minor, BWV1002

How Old is Song?
Violin Sonata

» no.6 Valse sentimentale in F minor

Brandenburg Concerto no.5 in D major, BWV1050
Concerto for flute, violin and harpsichord in A minor, BWV1044
Partita for solo violin no.1 in B minor, BWV1002

How Old is Song?
Violin Sonata

» no.6 Valse sentimentale in F minor

Sony Classical is pleased to release the first ever collection of violinist Joseph Szigetis complete Columbia recordings from 1940 to 1956 in this stunning 17-CD edition. 31 works for the first time on CD by Sony Classical, remastered from the original analogue discs and tapes using 24-bit / 192kHz high resolution. Collaborations with many renowned musicians including Andor Foldes, Mieczyslaw Horzowski, Myra Hess, Pablo Casals and Igor Stravinsky are featured in this collection. This must-have box set includes facsimiles LP-sleeves and labels, booklet with full discographical notes.
Szigeti had a remarkable career. Born in 1892 in Budapest, where he studied with Jenő Hubay, one of the most celebrated virtuosos and teachers of that golden era of violin playing, he was praised by the iconic German violinist Joseph Joachim at his Berlin debut in 1905; lived in London for several years following his acclaimed 1907 debut and played chamber music with, among others, Myra Hess and Ferruccio Busoni; was a frequent visitor after the war to the Soviet Union, where he introduced Prokofievs First Violin Concerto; made his triumphant American debut at Carnegie Hall under Stokowski in 1925; and toured the world during the 1930s before finally settling in the US in 1940. Nathan Milstein, one of his great colleagues, said in a touching tribute to Szigeti, who died in 1973: He was an incredibly cultured musician. Actually, his talent grew out of his culture.  I always admired him, and he was respected by musicians. In his late years, Joseph Szigeti finally got the appreciation he deserved from the general public as well. Sony Classicals new collection of his Columbia recordings, many never before released on CD at Sony Classical, can only further enhance that appreciation.