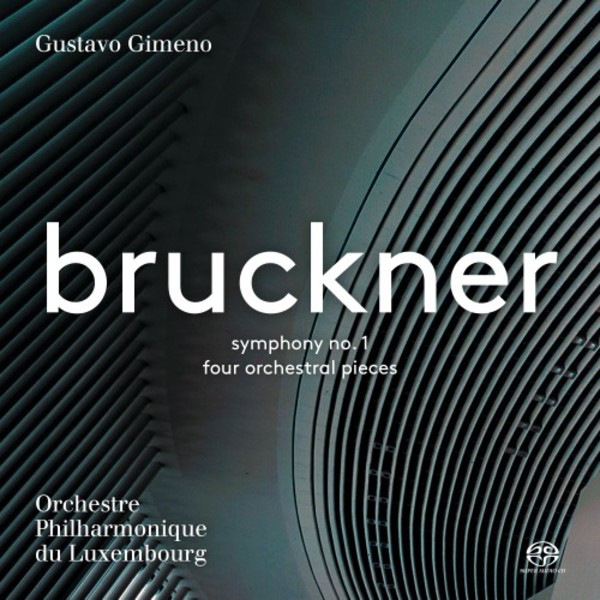 In his keenly anticipated first release for PENTATONE, rising young star Gustavo Gimeno conducts the Orchestre Philharmonique du Luxembourg in a riveting performance Bruckners towering First Symphony, heard in the lesser-known Vienna version of 1890/1891. Bruckners massive orchestral landscapes often feel like unstoppable forces of nature: radiant, magnificent and thrilling, with a soul-searching beauty and power. Feelings of reverence and awe are accentuated by organ-like sonorities which are given new dimensions with blazes of orchestral colour and disconcerting titanic shifts. Little wonder that his First Symphony so bemused audiences at its premiere. Also included in this release are his Four Orchestral Pieces from 1862. These intriguing but sometimes overlooked works give a fascinating insight into Bruckners developing compositional style.

Yesterday, a true conductor was born in the Concertgebouw, wrote the Dutch newspaper Het Parool of Gustavo Gimenos conducting debut with the Royal Concertgebouw Orchestra in 2014. His career has since taken off to widespread acclaim. In a busy schedule, he has since debuted with major orchestras in Europe and America, and toured with the Royal Concertgebouw Orchestra to Taiwan and Japan. Gimeno cultivates  a bright, transparent orchestral sound free of dull pathos and also rediscovers colours in this score, wrote the Trierischer Volksfreund in 2014.

Starting with the 2015/2016 season, Gimenez took up the post of Music Director of the Orchestre Philharmonique du Luxembourg, focussing on the first symphonies of Bruckner, Mahler, Beethoven, Schumann and Shostakovich. Together with the orchestra, he started an auspicious collaboration with PENTATONE in 2016, with three releases planned in 2017.