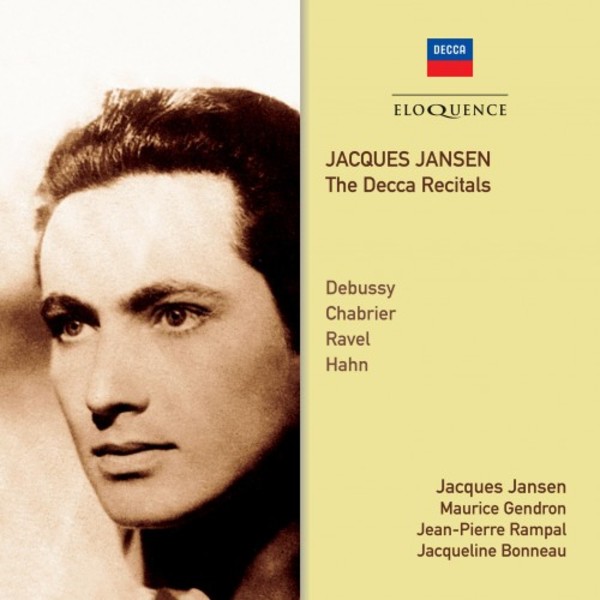 Jansen is Pelléas, wrote Eduardo Arnosi in a love-letter to Roger Desormières still-unsurpassed first recording (Opera magazine, September 1999), and few would demur. There was, however, much more to Jacques Jansen than the refined ardour and spontaneity of this 1941 recording.

Just over a decade later, Decca producer John Culshaw spent a day in Paris at the studio used by Radio France, recording the still-youthful Jansen (19132002) in songs of Debussy, Chabrier, Ravel and Hahn which would be issued on two albums in 1953 and 1955. Pelléas remained his signature role  at a Rome production in 1956 he was praised for his youth, good looks and sensitive musicianship (Opera magazine, June 1956)  and he would still be singing it in 1969 before retiring from the stage to teach at the Paris Conservatoire. However, the broader appeal of Lehárs The Merry Widow gave him cause to sing Danilo on around 1500 occasions in France, and it is the dry, champagne wit sharpened by operetta that distinguishes this song recital, which is now issued for the first time on CD.

Jansen had an innate feeling for the throwaway perfection of Reynaldo Hahns word-setting: at the opera in Québec he also both starred in and produced the sparkling Ciboulette. In his booklet-note appreciation, Tully Potter remarks on the sharply edged character of Jansens singing, and the unusually dramatic profile given to songs too often casually dismissed as trivial.

Jacques Jansen uses the text in such an intimate way that one feels this telling of a single love is directed just at the single listener. His Pelléas-like speech-song delivery  and Jacqueline Bonneaus pellucid playing, make it a likeable and memorable reading. - Alan Blyth, Song on Record 2 (CUP: 1988) (Chabrier - Lîle heureuse)