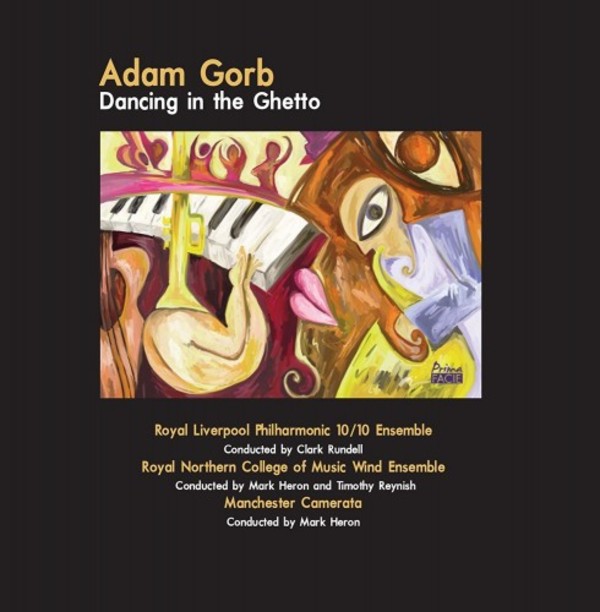 Adam Gorb - Dancing in the Ghetto

Dancing in the Ghetto
Love Transforming
Serenade for Spring
Symphony no.1 in C major
Weimar

Dancing in the Ghetto
Love Transforming
Serenade for Spring
Symphony no.1 in C major
Weimar

The music of Adam Gorb has been performed, recorded and broadcast worldwide. This CD focusses on Gorb's particular passion on music for large ensemble, with works spanning the 21st century played by leading ensembles from the North West of England.

The first work on the CD, which shares its title, Dancing in the Ghetto (2008), is an exuberantly brash four-minute blast for a mixed ensemble, with material that was later used in his opera Anya 17 (2012), a harrowing story about modern-day slavery, which has had productions in Germany and the USA. The piece here concentrates on the overheated jubilation typical in the sounds of much Eastern European folk music. The idea of celebration in the face of catastrophe was a potent influence on the next piece, Weimar (2000), which takes its inspiration from the desperate and dangerous period in Germany's history before the rise of Hitler (who is portrayed in all his Munich-beer-hall-putsch grotesquerie in the third movement of this work). The jazz elements that surface towards the end are meant to express both defiance and self denial. Both these works are played by the Liverpool 10/10 Ensemble conducted by Clark Rundell.

Much of Gorb's music for wind ensemble is in repertoires around the globe. Symphony No.1 in C (2000), played by the Royal Northern College of Music Wind Ensemble, is for chamber winds typically found in serenades of the late 18th century, and is a particular tribute to Beethoven's First Symphony. The following piece, Serenade for Spring (2008), for small chamber orchestra, played by Manchester Camerata and conducted by Mark Heron, has an elusive divertimento-like character, but with darker elements: the road to bucolic tranquility is not a straightforward one. For the final work, Love Transforming (2013), the full Royal Northern College of Music Wind Ensemble is used, this time conducted by its dedicatee Timothy Reynish, the UK guru of this medium. Very much going against the tried and tested formula of cheerful curtain raisers, this work is dark and despairing before a shimmering nirvana is reached through the mist at the close, with the help of nine rain sticks.