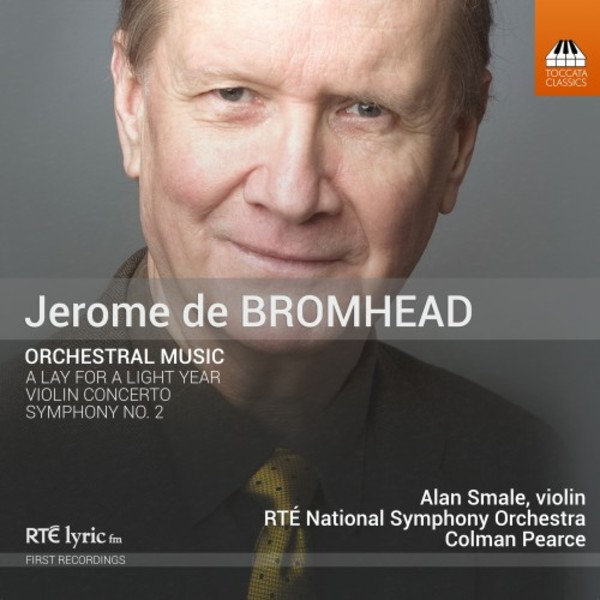 A Lay for a Light Year
Symphony no.2
Violin Concerto

A Lay for a Light Year
Symphony no.2
Violin Concerto

The vitality of these three works by the Irish composer Jerome de Bromhead (b. 1945) point to the sheer pleasure that their creator takes in writing music. The swirling ebullience of the tone-poem A Lay for a Light Year (2014) suggests the scale and energy of the cosmos. The edgy, elegiac lyricism of the Violin Concerto (2008) inhabits textures that are brittle and clear like Stravinskys. The more chromatic Second Symphony (1994) suggests a vast sense of space behind a glittering foreground of kaleidoscopic orchestral colours.

A member of his family, Lt Gonville Bromhead, who fought in the Battle of Rorkes Drift, was made famous when Michael Caine played the part of Lt Bromhead in the 1964 film Zulu.

Colman Pearce (born in Dublin in 1938) is a composer and pianist as well as a conductor. He has conducted most of Irelands orchestras, among them the RTÉ Light Orchestra and the RTÉ National Symphony Orchestra, with which he performed many works by contemporary international and Irish composers; he has also conducted for the Dublin Grand Opera Society and for the Wexford Opera Festival. Abroad he has been held positions with orchestras in Spain and the USA. He has made many recordings on the Naxos and Marco Polo labels. Since the 1990s he has devoted more time to composition.