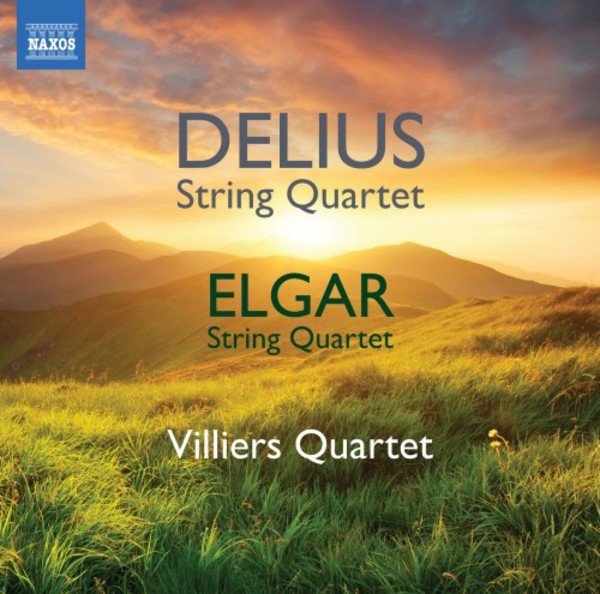 The legacy of the First World War left its mark on the music of near contemporaries Edward Elgar and Frederick Delius. The powerful outer movements of Elgars String Quartet in E minor frame a wistful and sombre Andante piacevole. Delius was dissatisfied with the first, three-movement version of his Quartet and revised the score. On this recording the final 1917 version is followed by the original versions of the opening movement and of the Late Swallows slow movement, offering a rare glimpse into Deliuss compositional workshop.

The Villiers Quartet are leading exponents of the British repertoire and have made acclaimed discs for Naxos  including a disc of Robert Stills later Quartets (8571353) of which Gramophone wrote: No praise can be
too high for these sublimely articulate and concentrated readings by the Villiers Quartet, for whose leader, James Dickenson, the whole project was very much a labour of love. Admirable sound and balance, too.

The recent recording of Frickers String Quartets has gained widespread acclaim in the UK. With impeccable timing, the Villiers Quartet have captured the current mood of edgy, querulous uncertainty with their release of the three magnificently bracing string quartets of Peter Racine Fricker... The playing of this highly talented quartet, champions of British music, is superb throughout and augurs well for their forthcoming release of Delius and Elgar. - The Observer

Two string quartets written by major British composers during the dark years of World War I are the focus of the latest Naxos disc from the young Villiers Quartet and, like their previous releases of works by Robert Still and Peter Racine Fricker, they provide rich food for thought.

Frederick Delius originally composed his String Quartet in E minor as a three-movement work in spring 1916, and it was premiered in that form the following November. However, he was dissatisfied with the piece, and the following year substantially revised it, reworking the outer movements, adding a second-movement scherzo, and completely recomposing the Late Swallows second movement. This became the works published form, opening proceedings here, but, thanks to some musicological detective work by Daniel Grimley, the Villiers Quartet also include the original versions of the opening movement and the Late Swallows slow movement. It is particularly fascinating to hear the latter in its earlier form, with its opening first violin flourish and poignant middle section.

The Villiers Quartet play the whole work as to the manner born, bringing out the musics febrile flair, its nods to French Impressionism and even Schoenbergian Expressionism. They bring out all the repressed passion, too, in the extraordinary homophonic eruptions that twice explode during the course of the first movement, but in the 1917 second movement they are fleet and graceful, and in the Late Swallows movement they capture the mysterious wistfulness of the central episode in both its versions. Throughout, rhythms are buoyant, intonation faultless and the alert playing has flashes of keen wit. If youre looking for a version of the Delius Quartet for your library, this is now a clear front runner for a work that has been undeservedly neglected.

Elgars three-movement E minor String Quartet is one of three chamber works he wrote in the second half of 1918 after recuperating from a nervous breakdown brought on in the previous year by news of the war. These were very different works from the patriotic morale-boosters he had written in the conflicts earlier stages, taking refuge in absolute music but also full of passion alongside nobility. The Villiers Quartet bring out these qualities but also, thanks to the stereo separation of an immersive recording (at St Silas Church, Pentonville), the sheer richness of the scoring, which at times brings to mind the contemporaneous Cello Concerto. The intermezzo-like Piacevole central movement, with its quotation of the Chanson de Matin, was a favourite of Elgars wife, Alice, and it was played at her funeral in 1920, the year following the Quartets premiere. Here it receives a performance of gentle delicacy with moments of supreme radiance, while the outer movements are confident and bold, a testament to Elgars capacity for renewal.

Anyone looking for a British alternative to the ubiquitous Debussy-Ravel coupling would do well to acquire this disc, which adds yet another feather to the Villiers cap, as well as providing unusual added value in the form of the recovered early version of the Delius. There are helpfully detailed notes on both works by Daniel Grimley, and the presentation is attractive, complementing Michael Wights fine recording.

Both versions [of the Delius Quartet] are included here, each characterised by boundless melody, unexpected major-minor shifts and rhythmic buoyancy. The Villiers Quartet, formed in 2011 and specialists in English music (among other things; they are an inquisitive ensemble), play the Delius with zest and passion. Their Elgar, too, is febrile and bold. Fresh playing all round, at budget price.  Fiona Maddocks
The Observer 30 April 2017