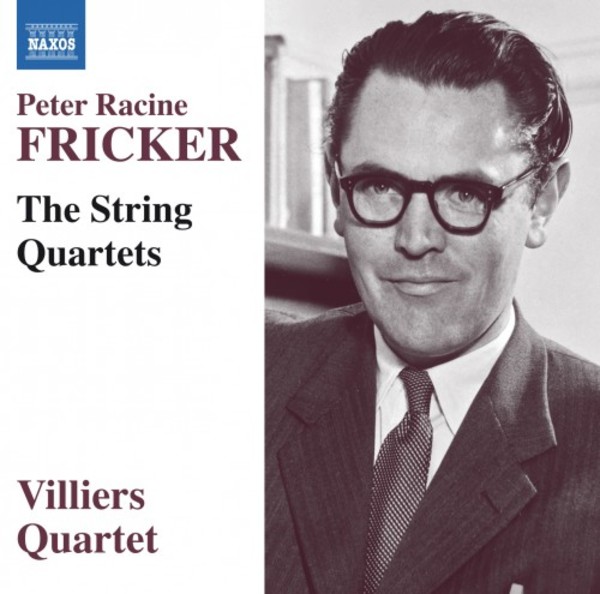 Benefitting from the afterglow of the 1949 Koussevitzky Prize for his First Symphony, Peter Racine Frickers original and striking First Quartet was premièred later that year to international acclaim. The Second Quartet shares a formal clarity and kinship with the tonality heard in the First, but evolving in range, technique and eloquence of expression. The symmetrical Third Quartet with its intricate variations is finely crafted in the serial style of Frickers later music.

The music of Peter Racine Fricker is undergoing something of a gradual renaissance at the moment after many years in the wilderness. The Lyrita label in particular has recently been raising awareness through rereleases of archive recordings of chamber, symphonic and choral works. New recordings are a rarity however, and with this brand new production of Frickers complete string quartets made in association with the British Music Society we are well ahead of the competition.

The Villiers Quartet is winner of the 2015 Radcliffe Chamber Music Competition, and holds the position of Quartet-in-Residence at Oxford Universitys Faculty of Music, encompassing the grand and iconic spirit of Londons extraordinary music tradition. The Villiers Quartet has developed an international reputation for its performances of English composers including Elgar, Britten, and Delius, and their début CD for Naxos, the Complete Quartets of Robert Still (8571353), won high praise in Gramophone, received five stars in Classical Music Magazine, and was admired for its remarkable musical strength [and] fine performances in BBC Music Magazine.

With impeccable timing, the Villiers Quartet have captured the current mood of edgy, querulous uncertainty with their release of the three magnificently bracing string quartets of Peter Racine Fricker (1920-90). Though separated by several years, each is distinctly in Frickers unique voice, never quite atonal; always charged with a vital, questing energy. ... The playing of this highly talented quartet, champions of British music, is superb throughout and augurs well for their forthcoming release of Delius and Elgar.  Stephen Pritchard
The Observer 26 February 2017