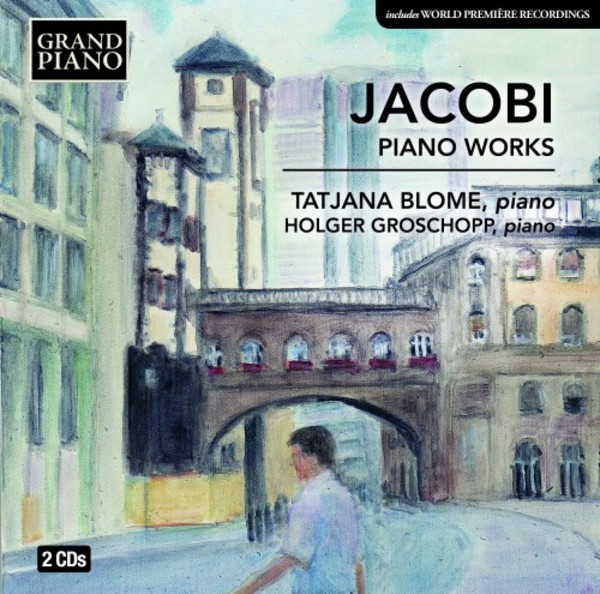 Wolfgang Jacobi (1894-1972) is known to saxophone and accordion players, but he is otherwise largely forgotten and his wider output is still being rediscovered today. He was declared a degenerate artist in 1930s Germany but found inspiration in Italy, alluding to Baroque styles in his Sonatas as well as in earlier works that also invoke the spirit of Reger and Grieg. Post-war freedom is reflected in the joyously neo-Classical Sonatine and charming Miniaturen, while the substantial Musik für zwei Klaviere explores the symbolism of one of J.S. Bachs favourite chorale melodies Durch Adams Fall.
Tatjana Blome took first prize in the Steinway Competition at the age of twelve and a year later gave her first piano recital. In 1995 she made her début with Brahmss Concerto No. 1 at the Berlin Philharmonie. She has appeared throughout Germany in recitals and as a soloist with various orchestras. She has some 70 recordings to her credit, for Deutsche Grammophon, EDA, Naxos and others. On the Grand Piano label, she has released two volumes of Gerhard Frommels piano sonatas (GP606 and 640) to critical acclaim, with MusicWeb International describing them as nuanced... powerful performances and American Record Guide finding one thing after another to marvel at and delight in.
Holger Groschopps solo career has taken him to most European countries, the Middle and Far East and North and Central America. He has performed as soloist at major European festivals (including Berlin, Salzburg and Montepulciano) and played chamber music with many prominent musicians. He has had a close collaboration with Claudio Abbado, Sir Simon Rattle, the Berlin Philharmonic, the DSO Berlin and the Mahler Chamber Orchestra. His six recordings released on the Capriccio label with transcriptions by Ferruccio Busoni were given the highest acclaim by a range of international critics, including highest recommendation in the BBC Music Magazine and Fanfare.