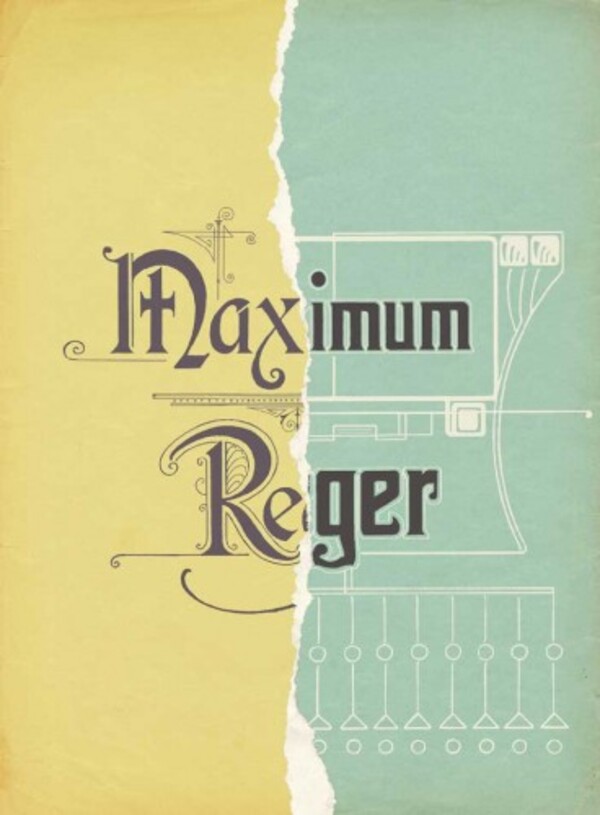 Following on from the multi award winning and best-selling The Genius of Cavaillé-Coll, Fugue State Films return with Maximum Reger, the biggest ever crowd-funded film about classical music, a truly monumental production that includes three feature-length documentaries and twelve hours of filmed performances of Max Reger's best music, played by the finest musicians.

In sum, this magisterial boxed set offers a complete portrait of this brilliant composer, who was judged by Hindemith to be the last giant in music.

This set includes music that is complex, but also many pieces that are approachable and exquisitely beautiful.
With this release, Reger is ushered into the pantheon of great composers.

This exhaustive boxed-set establishes Max Reger as one of the early 20th century's greatest composers.

The massive programme of music charts Reger's compositional output from the age of sixteen to the time of his death and includes a third of his 146 opus numbers:

Five hours of Reger's organ music is filmed on the following instruments:

I consider him a genius. Arnold Schoenberg on Max Reger

We're lucky as organists to know quite a bit about Max Reger (18731916), whose music shows up in many organ recital programmes and recordings, but is largely absent from orchestral, chamber and instrumental programmes. I've been a fan of his music since discovering it as a teenager, but I'm aware that a lot of people, particularly non-organists, don't know much about him. Therefore making a Max Reger DVD will not only mark his centenary next year, but should bring much needed attention to this great composer.

This should be a most exciting set of films for a number of reasons. The musicians who will be performing are brilliant and should provide searing performances. Much of the music we will record, as well as being great, is unfamiliar, and our goal is to shine a light on a little known musical realm. And the story itself is wild. Reger crammed an extraordinary amount into his 43 years. At the time he was one of Germany's most successful composers and was constantly touring and performing while also living a life of excess, going on drinking and eating binges that matched with a vast compositional output. But that's not the whole story. Reger was also a deeply spiritual man, a side that is reflected in his music. He was also described as a seismograph whose music reflected the major issues and struggles of his time. He lived through a period in which Europe struggled with decadence and ultimately marched into the abyss of the First World War. Reger's music, perhaps culminating in his ferocious Dies Irae, reflects this enormous cultural struggle. Therefore this film about Reger will also provide, from the fascinating viewpoint of a tormented and misunderstood genius who lived at double-speed, a vision of one of the most important periods of European history.

A great composer writing for the organ

Reger was like Franck in that early in his career he turned to the organ as a way of having music he wrote be performed  this was due to the gifted organist Karl Straube championing his compositions. Therefore Reger brought the ambitions and talents of a great composer to the organ, and in his organ music made a genuinely important contribution to the development of European classical music.

For instance, some people have argued that it is in his Opus 73 Variations for organ that Reger became the first composer to write atonal music.

Our main featured organist for this DVD will be Graham Barber, who will perform Opus 73, along with other great works such as the Chorale Fantasia and Fugue on Hallelujah, Gott zu Loben and the Fantasia and Fugue Opus 135b, or organs such as the Sauer organ in the Lutherkirche in Chemnitz, the new Reger organ at St Michael's, Weiden, and also the Schulze organ in Armley where he is organist.

Despite Opus 73, Reger was never heading towards atonality  he told Strauss he would never take that ultimate step. Reger ploughed a unique course for himself and created an unforgettable style that combines astonishing harmony with traditional forms such as the fugue and passacaglia.

In this sense his ne plus ultra is his Inferno Fantasia and Fugue in D minor, Opus 57. Surely this is the wildest, most virtuosic, most extraordinary fantasia and fugue ever written. It's never been filmed professionally before and should be gripping to listen to and watch.

Bernhard Buttmann, a veteran who has recorded all of Reger's organ music, plays it brilliantly and will perform it on the Link organ of the Pauluskirche in Ulm, alongside various other works.

With works such as Opus 57 and 73, it is no wonder that Reger has developed a fearsome reputation for dense chromaticism. But his Second Sonata, Opus 60, presents another side of him  clear, transparent, to the point, concise. This will be played by Bernhard Haas.

Max Reger has always divided critics, audiences and musicians, on the one hand winning the most extraordinary loyalty and praise, and on the other being dismissed out of hand. Therefore Reger is ripe for reappraisal. What if you just don't like his music?

We feel that his story is so compelling and touches on so many fascinating themes and concerns that even if you decide you don't like his music you will enjoy the story and acknowledge reger's interest and importance. So we relish the opportunity to establish convincingly that he deserves recognition and awareness and should stand alongside Mahler and Strauss as one of the most important composers of his time, worthy of a place in the mainstream of musical life.

The documentary about Reger's life, to be presented on DVD in three 52-minute episodes, will serve as both a biography and also an in-depth survey of his music. Presented by singer Frauke May and conductor Ira Levin, two stories will be told  the past story of Reger's life, with his many struggles but also his extraordinary accomplishments, and the present story of Levin preparing to conduct a performance of his new arrangement for orchestra of Reger's famous piano work, the Bach Variations. Therefore the film will cover both the hugely compelling narrative of Reger's life as well as showing how his music is performed and received today.

May and Levin will interview, in either German or English, all the major Reger scholars and performers, from Susanne Popp and her colleagues at the Reger Institute to performers such as Julius Berger, Bernhard Buttmann and Graham Barber. We will take advantage of one Reger-performer's extraordinary resemblance to Reger  Rudolf Meister  who will stand in for Reger in scenes about his life. We will use the piano and organ rolls at the Max Reger Institute to recreate Reger's own performances using an original mechanical player-piano and player-organ.

The documentary will include excerpts from Reger's most important works for orchestra, piano, chamber ensemble and organ (these works will be included in their entirety on the other CDs and DVDs of the boxed set  never before have all the key works of Reger for whatever instrument been available in one set).

Our aim is nothing less than to establish Reger among the pantheon of great composers, and we will devote all our resources to accomplishing this through making an extraordinary set of films and recordings in exquisite packaging that will bring the attention of the classical music world onto the genius and importance of Max Reger.

... a relatively straightforward yet informative examination of Reger's life and works that is thankfully bereft of gimmicky visual effects. Through a sequence of extended interviews and musical illustrations, the man and his legacy are probed in quietly persuasive terms ... all in all, this is a hugely rewarding achievement that should persuade us all to revisit our preconceptions of Max Reger's place in music history.  Erik Levi (Instrumental Choice)
BBC Music Magazine August 2017

Time and again throughout this set works are illustrated, most of them inhabiting the realms of organ or chamber music, that reach out with a degree of modulatory boldness unknown to man until Regers arrival on this planet. Superb organists such as Bernhard Buttmann, Bernhard Haas and Graham Barber present some of Regers finest pieces (played on different instruments), Haas and Barber helping to explain their appeal and inherent difficulties  conceptually rather than technically  while the pioneering pianist/conductor Ira Levin further explains elements of the Reger phenomenon, presenting his own orchestration of the Beethoven Variations...  Rob Cowan
Gramophone June 2017

I can confidently say that if you have any interest in the music of the first 16 years of last century, you should buy this set. Mortgage your house, sell your relatives into slavery, but get it! ... Three of the six discs each feature one section of a three-part, 210-minute documentary, plus filmed performances. ... the performances are superb, helping to show Reger in the best light. The main thread of the documentary is a long conversation between the mezzo-soprano Frauke May and Dr Susanne Popp of the Max-Reger-Institut, a leading Reger scholar and a most sympathetic personality. ... This glorious, occasionally frustrating composer certainly deserves this tribute; and newcomers will find that once they get on to his wavelength, his harmony will enter their bones.  Tully Potter
MusicWeb International June 2017