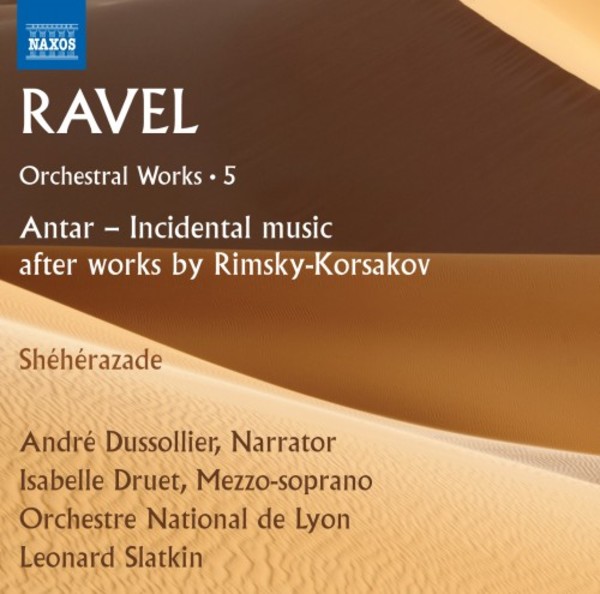 The impact of Russian and Oriental culture on Ravels formative years retained a hold on him throughout his life. His colourfully re-orchestrated selections from Rimsky-Korsakovs symphonic suite Antar and opera Mlada, with interpolations of his own music, as the incidental score for a theatre production are heard here in their première recording, revived and reconstructed alongside a new text that symbolizes the romance and chivalric spirit of Antar the warrior-poet and his beloved Abla. Ravels fascination with the exotic is brought together with Debussys influence in the ravishing and enduringly popular song cycle Shéhérazade.

Mezzo-soprano Isabelle Druet was a laureate of the Queen Elisabeth Competition in 2008, winning the Révélation of the Victoires de la musique in 2010 and Rising Star in 2013. Her operatic rôles have included Carmen at Düsseldorf Opera, and title-rôles in Glucks Orphée et Eurydice and Dido and Aeneas at the Opéra de Versailles. She recently appeared on our recording of Ravels LHeure espagnole (8660337) with Leonard Slatkin and the Orchestre National de Lyon, Opera News describing her as a lyric mezzo of richness and brightness in equal parts, with welcome ease on top.

The narrators role in Antar is taken by the distinguished French actor André Dussollier, whose career from 1970 to the present has included innumerable film and theatre appearances recognized by a Lumière Award nomination (among many other award nominations), three César Awards and the 2015 Molière Award.