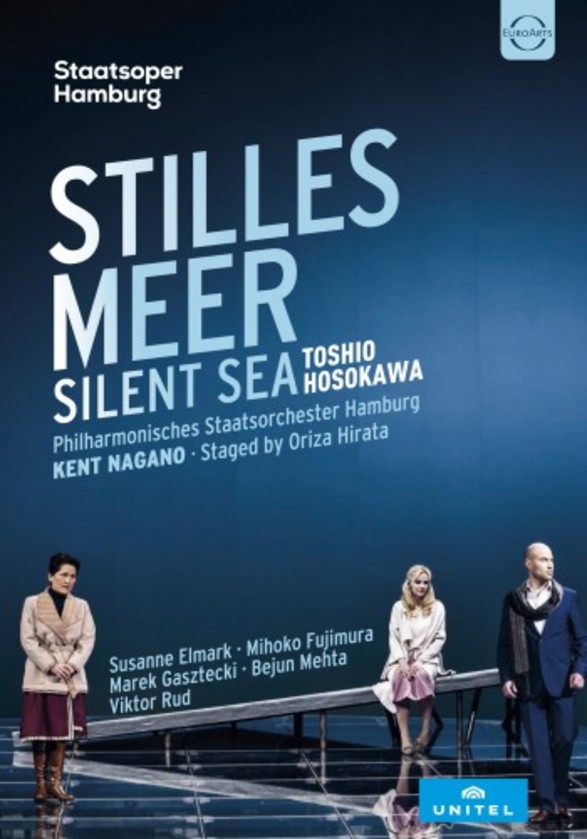 The first Hamburgische Staatsoper production with Musical Director Kent Nagano to be released on DVD. One of Germanys most acclaimed theatrical events of recent years: Stilles Meer (Silent Sea), by Japans most important living composer, dedicated to the victims of the earthquake and tsunami that took place on 11 March 2011.
Toshio Hosokawas opera draws on the Noh play Sumidagawa (Sumida River) about a mothers overwhelming grief on the death of her son, and Mori Ōgais book Maihime (The Dancing Girl), about an ill-fated German-Japanese love affair. The production is staged by the celebrated Japanese director-playwright Oriza Hirata.
A fantastic cast, led by stars such as Danish soprano Susanne Elmark and countertenor Bejun Mehta.
Including a 15-minute documentary in which the lead cast visit the tsunami area and the production is explained.
Susanne Elmark, who plays the unwittingly irritating Claudia, sings with clarity and warmth. Bejun Mehta infuses his lines with affectingly bittersweet melancholy. - Financial Times
The 2011 Tôhoku earthquake and tsunami, and the Fukushima nuclear plant incident unleashed by it, have forced me again to consider the power of nature and human arrogance. Theres a scene in the opera where the people go to the seashore with lanterns and give the lights back to the sea. This ritual illustrates our belief that the human soul comes from the sea and returns to it after death. But if this sea isnt clean any more, where can we return to? I was in Fukushima and saw the deserted towns and cities. Ill never forget it. - Toshio Hosokawa
DVD Picture: 16:9  NTSC
DVD Sound: PCM Stereo,  DD 5.1, DTS 5.1
Region code: 0 (worldwide)
Running time: 120 mins (105 mins Opera, 15 mins Bonus)
Production year: 2016