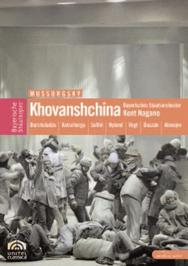 Mussorgsky's monumental Khovanshchina is regarded as one of the most important works of Russian Opera. The five-act opera about the Moscow Uprising of 1682 was unfinished and unperformed when the composer died in 1881. The 'national music drama', as it is subtitled, received its first performance in an edition by Rimsky-Korsakov in 1886. Shostakovich later unveiled his own orchestration on 25 November 1960 at the Mariinsky Theatre.

Young Russian director and stage designer Dmitri Tcherniakov has made his name as a specialist in Russian repertoire in St. Petersburg, at the Bolshoi in Moscow and at the Berlin State Opera. The acclaimed première of this production at the Bavarian State Opera in March 2007 initiated a series of operas from the Slavic repertoire.

With renowned singers Paata Burchuladze, Doris Soffel and Klaus Florian Vogt under Kent Nagano's musical direction, the opera is sung in Russian. It draws us into a bloody power struggle in dark Russia just before the modernist reforms of Peter the Great. The final chorus, which Musorgsky did not compose, is played in the orchestrally transparent version of Igor Stravinsky, the third great Russian composer who contributed to making Khovanshchina a gripping stage work for all times.