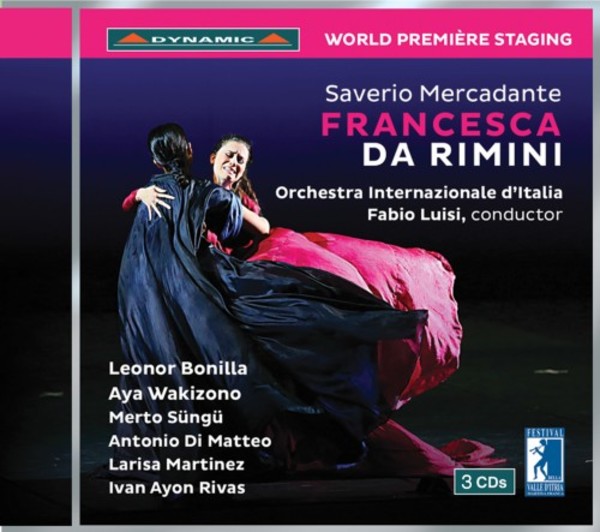 Although written almost two centuries ago by Saverio Mercadante, and eagerly anticipated by many theatres of the day, Francesca da Rimini was, in fact, never staged. A long series of incidents prevented it from reaching production until 185 years after its composition. The long forgotten manuscript, remembered only for its history of bad luck, suddenly re-emerged five years ago in Madrid, the city where it was to have been premièred in 1831.

The soprano Leonor Bonilla (Francesca) is most impressive in the title role: she portrays the characters psychological frailty as well as her determination, drawing on a solid vocal technique and delivering incredible inflections and confident, dazzling vocal lines that easily soar into her high register. She maintains a stage presence that's both casual and poignant, even venturing some dance steps with the corps de ballet.

Aya Wakizono is an admirable Paolo. Endowed with a superb mezzo voice, she delivers consistently throughout her range, fluently delivering the virtuoso coloratura lines. No less demanding is the tenor role of Lanciotto, with its daunting leaps and ornamentation worthy of the Neapolitan Rossini. Mert Süngü will no doubt in time improve on his occasional touches of harshness, but he tackles all the difficulties of the part with an impressive vocal assurance and expressivity.