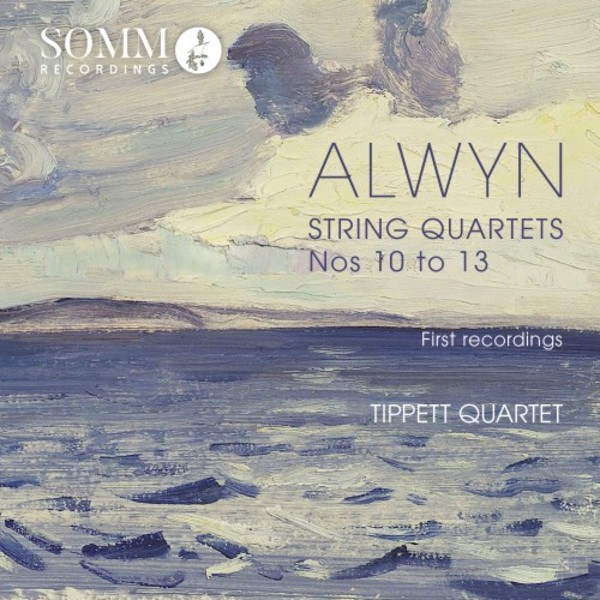 As ever, SOMM and its artists are busy discovering new treasures in a wide range of repertoire and this month's CD release featuring first recordings of four of William Alwyn's early String Quartets with the celebrated Tippett Quartet, will come as a delightful surprise.
Alwyn became Professor of Composition at London's Royal Academy of Music in 1926 at the age of 21, a position that he was to retain for almost 30 years. His large corpus of work comes close to 300 works which include music in all genres. His major orchestral works include five symphonies, and concertos for flute, oboe, violin, harp and piano and no less than 200 film scores.
Alwyn began writing music for string quartet in 1920, when he produced his String Quartet in G minor at just fifteen years of age. The years 1923 to 1936 produced a further twelve string quartets (four of which feature on this disc), so fascinated was the composer with this most intimate of mediums, as he called it. The four string quartets included here contain some truly memorable and original ideas and have been unjustly neglected after receiving enthusiastic reviews at their respective premieres.
Each of these quartets inhabit quite different sound worlds. No.10 (En voyage) is the most overtly romantic. Alwyn was an avid reader throughout his life and often found inspiration for his creative work as a composer from poetry or a novel he had just read that would suddenly fire his imagination. The single movement Fantasia (No.12) is the most experimental of the four with Alwyn trying his hand at being more modern and contemporary with romanticism cast to one side for the moment. However, this was not to last as Quartets 11 and 13 clearly demonstrate that Alwyn was and would always remain a romantic at heart.

Only a composer so prolific and yet so perfectionist as William Alwyn could have completed over a dozen string quartets of this quality and then rejected them. These four works date from more than a decade before his official published No 1; two were premiered in 1936 by the informatively titled Birmingham Ladies String Quartet, while the others had to wait until after his death. All are here recorded for the first time. ... The Tippett Quartet give warm, muscular performances.  Erica Jeal
The Guardian 10 February 2017