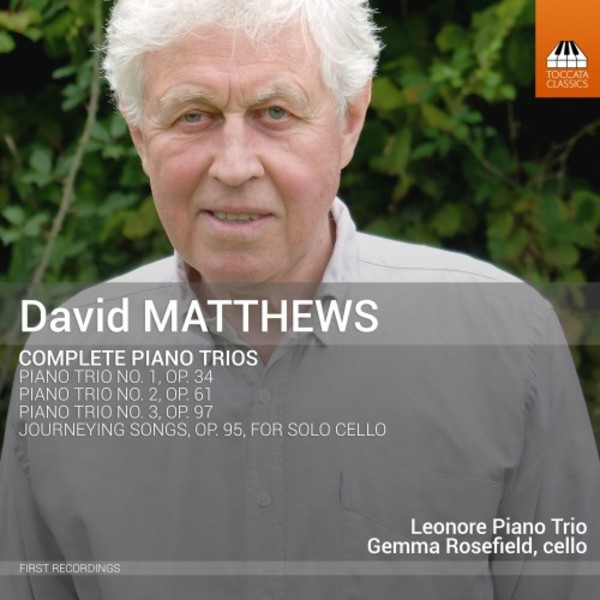 David Matthews (b. 1943) has become one of the UKs leading composers, both of symphonic and chamber music. One US reviewer described his string quartets as musical thinking of the highest order and quartet writing in the great tradition of Beethoven, Bartók, Britten, and Tippett  influences that Matthews readily acknowledges.

These three piano trios evoke two other masters, since they have something of the drama of Shostakovich and the lyrical intensity of Vaughan Williams. All these elements are drawn together in Matthewss own voice to make these works some of the most moving chamber music of recent years, in performances that the composer considers exemplary.

The Leonore Piano Trio brings together three internationally acclaimed artists  the violinist Benjamin Nabarro, cellist Gemma Rosefield and pianist Tim Horton  who have given concerts throughout the UK, Italy and New Zealand. For Hyperion they have recorded the two piano trios by Anton Arensky, about which Gramophone wrote it is harder to imagine playing of greater empathy, and the three trios by Édouard Lalo, which was selected as Disc of the Week on BBC Radio 3 Record Review and which The Sunday Times described as remarkable. This is their first recording for Toccata Classics.

Winner of the prestigious Pierre Fournier Award at the Wigmore Hall in 2007, Gemma Rosefield made her concerto debut at the age of sixteen when she won First Prize in the European Music for Youth Competition in Oslo. She performs regularly on BBC Radio 3 and, outside the UK, has played widely throughout Europe, as well as in Japan, Kenya, Mexico, New Zealand, Russia and the USA. She has a deep interest in contemporary music, and works have been written for her by James Francis Brown, Julian Dawes, Michael Kamen, David Knotts, Cecilia McDowall, David Matthews and Rhian Samuel.

Try the Adagio of Matthewss Second Trio, of 1993. Over a measured accompaniment on the piano, violin and cello sing and climb and soar; a long, glorious melody that simply builds and builds. Its almost Schubertian in its cumulative poignancy. Matthews is a romantic. ... And again, you dont need to know the specific sources of his inspiration  which range from a West Highland seascape in the Second Trio to a deadpan portrait of Hans Keller in the scherzo of the First  to respond to this music. ... The Leonore Trio have clearly lived with this music; their playing is alert and stylish, unafraid to let the melodies soar. Their performances seem to me definitive, says Matthews.  Richard Bratby
Gramophone April 2017