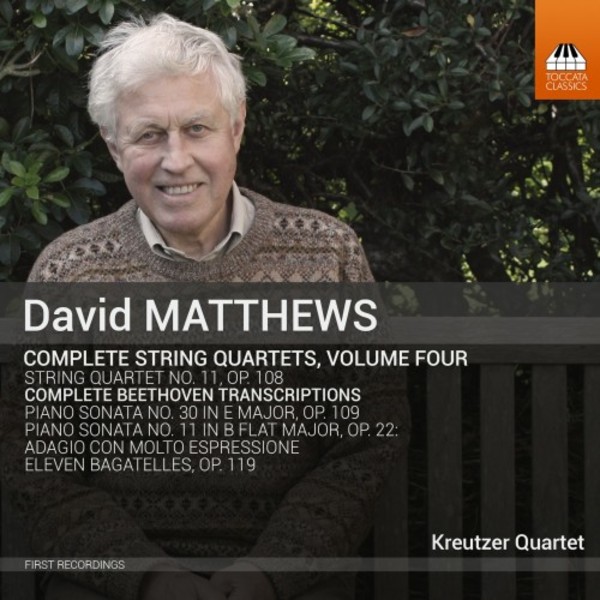 This fourth CD in the series of David Matthewss complete string quartets presents the String Quartet no.11  a set of variations on the eighth of Beethovens Op.119 Bagatelles  and Matthewss own contribution to the Diabelli Variations, first written for piano and transcribed for string quartet  a small miracle, in the words of the violinist Peter Sheppard Skærved.

The American critic Robert Reilly described the music on Volume 1 of this cycle of the Complete String Quartets of David Matthews (b.1943) as some of the most concentrated, penetrating writing for this medium in the past 30 years or more. It is musical thinking of the highest order and quartet writing in the great tradition of Beethoven, Bartók, Britten, and Tippett.

The Kreutzer Quartet  Peter Sheppard Skærved and Mihailo Trandafilovski, violins; Morgan Goff, viola; Neil Heyde, cello  have worked with David Matthews for many years now; many of his quartets were written with them in mind. The Kreutzer Quartet is also engaged on a project to record the string quartets of Beethovens friend and colleague Antoine Reicha, also for Toccata Classics.

Beethoven has been a lifelong source of inspiration for David Matthews, so it was natural for him to take a bagatelle by his hero as the starting point for his own monumental String Quartet No 11, a set of 13 variations, similar in scale to Beethovens late B flat Op 130 and C sharp minor Op 131 quartets. Its a startling, broad work, travelling towards its blazingly optimistic finale via all manner of dance forms and even a touch of serialism, with a profound reworking of the cavatina from the Op 130 quartet at its core.  Stephen Pritchard
The Observer 21 February 2016