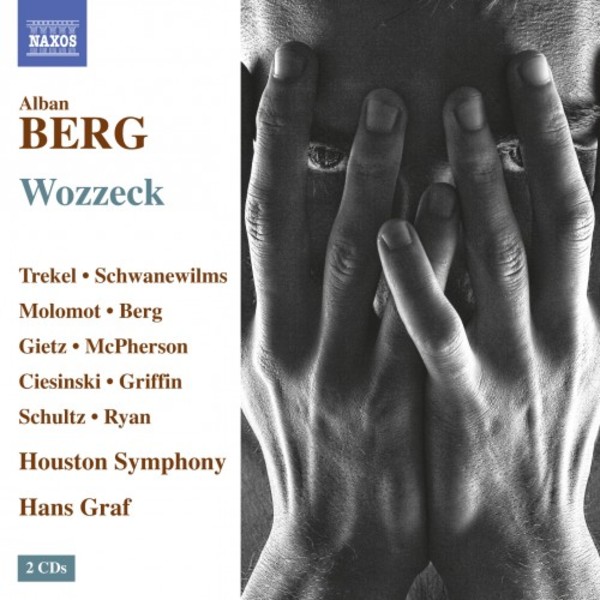 Based on real events and playwright Georg Büchners starkly vehement text, Alban Bergs tragic opera Wozzeck is an epoch-making work, in stark contrast to the previous high romantic ideals of the genre, that led Schoenberg to exclaim now thats what I call an opera! Immensely powerful and heartbreakingly moving as a drama, Wozzeck explores the victimisation, despair and madness of a central character who has no place in society, its deeply humane message and sublimely innovative score firmly establishing it as a 20th-century masterpiece.

This significant release follows on from successful recordings with the Houston Symphony Orchestra conducted by Hans Graf  making their Naxos debut in 2009 with Zemlinskys Lyric Symphony and Bergs Three Pieces (8572048). Our Wozzeck soloist was admired by Gramophone for this earlier release: Roman Trekels experience in big operatic roles, not least Wagner, makes him an excellent choice for the four male-voice movements: he has the presence and range to belong in the company of the starriest baritones, from Dietrich Fischer-Dieskau to Bryn Terfel.

Baritone Roman Trekel has won several international singing competitions. His contributions to the Naxos Schubert Lied Edition have been much admired, with a Winterreise (Vol.1, 8554471) that is moving and beautifully sung (San Jose Mercury News) and ClassicsToday.com considering that this recording stands with the best on disc.

The cast for this production of Wozzeck is notable for its strength and depth. Soprano Anne Schwanewilms (Marie) was proclaimed by Londons Time Out as one of the worlds finest interpreters of late romantic opera and song. Internationally acclaimed tenor Marc Molomot (Captain) is highly regarded as an excellent actor-singer (Le Monde), and star bass-baritone Nathan Berg (Doctor) received acclaim for his role as the sea captain in Der fliegende Holländer from The Salt Lake Tribune: Bergs vocally secure performance suggested not only the world-weariness that would come from decades, if not centuries, roaming the seas, but also a depth of poise and gravity that made even his quietest utterances compelling.

The singers are close-miked, but so are the instrumental soloists, and the perspective only moves back a fraction for the orchestral interludes, which here serve to pull tight the threads between each scene. The extra rehearsals demanded by such an undertaking have been rewarded by one of the finest Wozzecks on record, orchestrally speaking... The string bass sound is full and threatening where necessary, and the fruity-toned first clarinet cuts through the scene in the pub with great style. The most memorable vocal impression is left by Anne Schwanewilms, who brings distinct and theatrical ideas about Marie to the concert platform.  Peter Quantrill
Gramophone March 2017