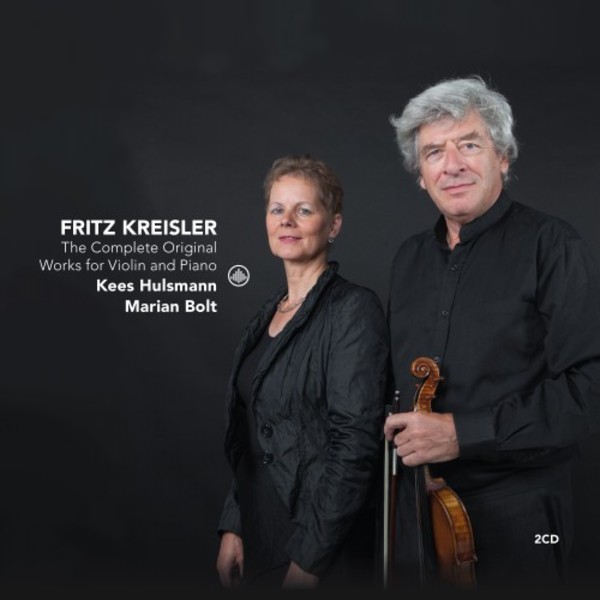 Kreisler - The Complete Original Works for Violin and Piano

Fritz Kreisler is considered among the greatest virtuosos of 20th-century violin playing, and this recording gathers what is considered the complete original output for violin and piano composed by Kreisler himself. Much of this collection, performed by Kees Hülsmann and Marian Bolt, is of pieces rarely recorded.

The voluminous oeuvre of Fritz Kreisler includes many themes of composers from the Baroque to the beginning of the 20th century but he was also well known for passing off pieces he wrote himself as the work of other composers throughout musical history. Hülsmann was especially interested not in the transcriptions and arrangements of other composers but in Kreislers own music - of which the three Viennese dances, Liebesleid, Liebesfreud and Schön Rosmarin, are the most famous pieces.

When composing the list of original pieces we had concerns about two, not being sure that they are purely Kreisler. The theme of the Rondino in the style of Beethoven could possibly be a lost piece for winds, but we could not find any proof of that, and in the Grave in the style of Friedemann Bach it was also impossible to find the hand of Bach. Thus we included these pieces. The most curious piece on this CD is the Song opus 6. We found it in a collection of works where it seemed untouched. Until now we have found no recording or even a record of a performance. Be it so, we recorded this melancholy little piece as a premiere.

Kees Hülsmann studied at the Conservatory in Amsterdam and with Manoug Parikian in London, and has been leader of several orchestras, including the Israel and Netherlands Chamber Orchestras, and the Netherlands Radio Philharmonic Orchestra. From 1986 to 2010 he was concertmaster of the Rotterdam Philharmonic Orchestra. Since 1989 he has been a frequent guest with the London orchestras including the LSO with whom he made an award-winning recording of Rimsky-Korsakovs Scheherazade for Telarc.