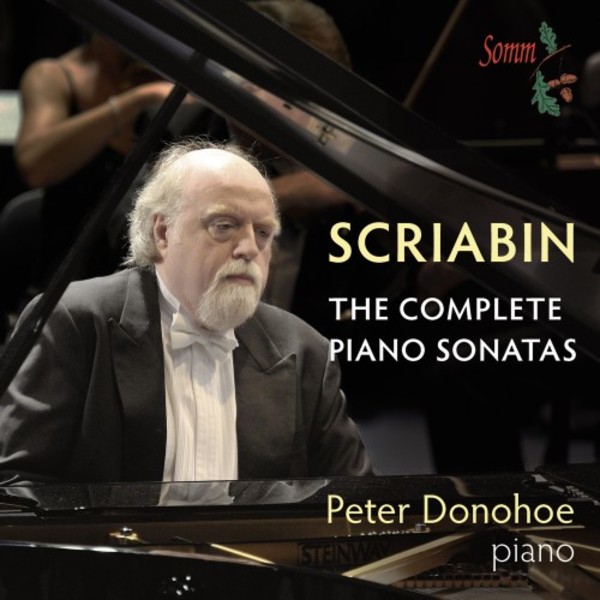 This latest SOMM release will no doubt be a special treat for the many fans of Peter Donohoes recordings: a two-CD slimline set of Scriabins Ten Piano Sonatas, ending with Vers la Flamme, op.72, one of his last pieces for piano, written in 1914.

Russia produced three renowned composer-pianists at the end of the nineteenth century: Medtner, Rachmaninov, and his fellow student at the Moscow Conservatoire, Alexander Scriabin, a unique figure in Russian music as he seemed to follow a musical path all his own, completely different from that of either of his contemporaries. He created an original, exotic soundworld which progressed from Chopinesque romanticism in the First Sonata to a world of fantasy, inhabited by uncompromising, audacious dissonances in the later Sonatas which make overwhelming demands on any performer who dares to tackle them.

In his Third Sonata Scriabin provided descriptions of the four movements under the heading States of the Soul. In the Fourth he experimented with Wagners Tristan harmonies. By the Sixth Sonata Scriabins harmonic tonality had completely broken down and dissipated  frightening dark and mysterious, impure, dangerous, as he himself wrote. The Seventh Sonata (White Mass) instructs the performer to play with a heavenly voluptuousness, with a dark majesty Through the music he wanted to express an ecstatic disorder creating a trance-like effect on performer and audience. The Ninth (Black Mass) represents the Satanic but the Tenth has an opening marked very sweetly and pure. He said of this, My Tenth Sonata is a sonata of insects. Insects are born from the sun, they are the kisses of the sun.

One feels a profundity of thought behind these interpretations  a lifetimes pondering, indeed-- and they fly from the page all the more freely for that. - Paul Driver, The Sunday Times, June 2016 (of SOMMCD259 Vol.3, Prokofiev War Sonatas).