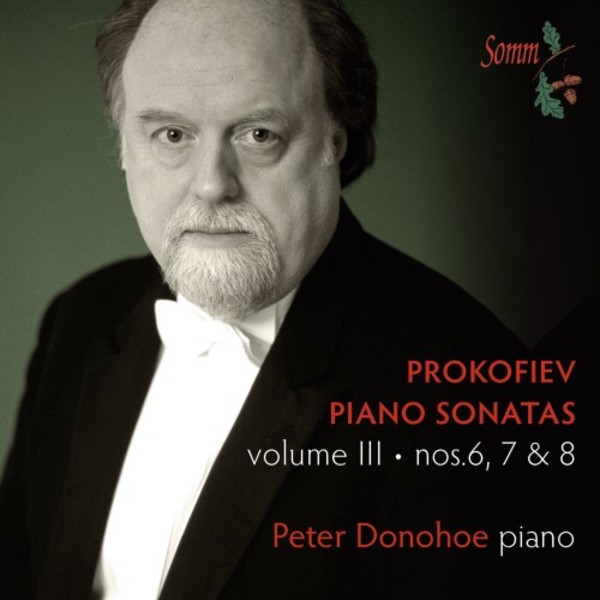 This is the third and final volume in Peter Donohoe's highly-praised recording of the complete Piano Sonatas of Sergei Prokofiev, devoted to what is known as the 'War Trilogy' - three piano sonatas, written consecutively during World War II, reflecting on and reacting to the horrors of what was referred to in Soviet Russia during their titanic struggle against Hitler as the 'Great Patriotic War'. It drew from Prokofiev some of his greatest music, expressed through his own instrument, the piano, producing in the central sonata of the trilogy, No.7, his most famous and brilliant piano music, with the exciting finale marked Precipitato (impetuous, headlong) depicting the ferocity and grit of the Russian attacks on the Nazi army. The beautiful Sixth Sonata is more personal and inward-looking, contemplative and moving, and the Eighth looks forward to a post-war world in which all conflict on Russian soil will have ceased.

Peter Donohoe has always been closely attuned to Russian music and particularly that of Prokofiev and his recordings of the War Trilogy go back more than 30 years. He first recorded the 7th Sonata in 1982 for HMV then again in 1991 together with the two other 'War Sonatas' 6 and 8 for EMI. He believes that Prokofiev's Sonatas form one of the greatest piano solo cycles in the repertoire. 'Prokofiev was creating these major works throughout his career  all of them are major and some are still underrated and I am delighted to have had the chance of recording the complete cycle at last.'

"Donohoe's authoritative playing shines through in every work  he has lived with these pieces for a long timeIn his hands every sonata makes a memorable impression, and the Fifth, with its cool classicality, receives one of the finest performances I have ever encountered on disc. A wonderful anthology." - Classical Ear (SOMMCD249, Vol.1)