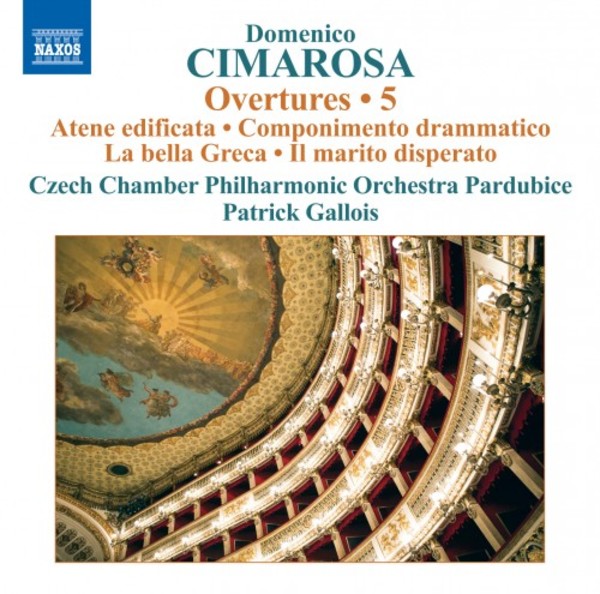 Domenico Cimarosa was one of the last great exponents of the Neapolitan School and one of the most famous and successful composers before the arrival of Rossini on the European opera scene. His works were produced and re-staged at innumerable performances in opera houses all over Europe. This programme represents the extraordinary range of Cimarosas career, from Le trame deluse (The Foiled Schemes) and La villana riconosciuta (The Country Girl Revealed), which were among his greatest hits, to overtures from cantatas such as Atene edificata (The Founding of Athens) and the dramatic composition for Cardinal de Bernis, written on the occasion of the birth of the Dauphin, the first-born son of Louis XVI.

The first volume (8570508) in this popular series appeared in 2007, and was immediately welcomed as a golden opportunity to make the acquaintance of some of the most spirited music of the late 18th century by MusicWeb International. Volume 2 (8570279) was admired by Fanfare for rewarding interpretations that summon respect for the composer as well as admiration for the performers. Volume 3 (8572734), also conducted by Patrick Gallois, was a WQXR New York Album of the Week in September 2013.

Volume 4 (8573459) was the first in the series to be performed by the Czech Chamber Philharmonic Orchestra, Pardubice. Warm reviews for this recording include commentary from Infodad.com: The orchestra plays all nine works on this CD with enthusiasm and involvement, not seeking depths that are not there but also being careful not to turn the works into throwaways  they are too well-made to be disposed of so lightly.