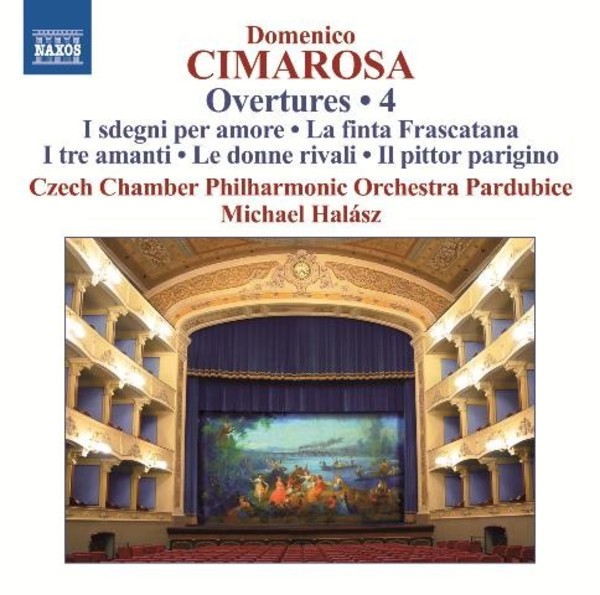 The most famous Italian opera composer of his day, Domenico Cimarosa saw his fame spread all over Europe. Written towards the end of the Neapolitan School era, his operas endured in popularity long after his death thanks to their melodic invention, colourful orchestration and sheer vitality.

The overtures in this programme include I tre amanti (The Three Lovers), the hit opera that made Cimarosas name outside Naples, Il pittor parigino (The Parisian Painter), and the tragedy Giunio Bruto that were admired by Haydn and conducted by him at the Esterházy court.

Michael Halász is an acclaimed conductor of opera, and was resident conductor at the Vienna State Opera for twenty years, beginning in 1991. Michael Halászs recordings for Naxos include ballets by Tchaikovsky, operatic excerpts of Wagner, symphonies by Beethoven, Schubert and Mahler, Rossini overtures, three volumes of Liszts symphonic poems (described by the Penguin Guide as one of the most successful collections of Liszts symphonic poems to have emerged in recent years), Beethovens Fidelio, Mozarts Don Giovanni, Le nozze di Figaro and Die Zauberflöte. He has also recorded Pergolesis Stabat Mater and Orfeo, and Richard Strausss Bourgeois Gentilhomme, and, for Marco Polo, Rubinsteins ballet music and Don Quixote, Schmidts Symphony No.1 and a pioneering recording of Schrekers opera Der ferne Klang.