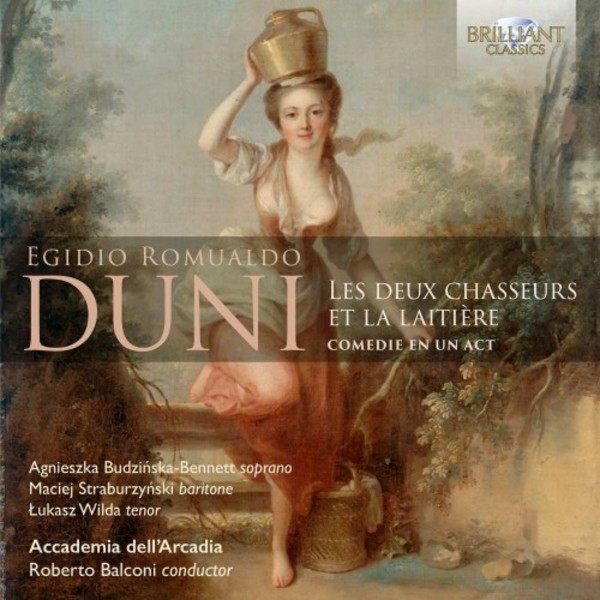 Les deux chasseurs et la laitière (The two hunters and the milkmaid) is an opéra-comique first performed at the Théâtre Italien in July 1763, and repeated many times there as well as attracting stagings across Europe for the following half-century, when the fashion for such light entertainment was supplanted by younger and better‐known contemporaries from Mozart to Rossini.

The composer in this case is Egidio Romualdo Duni (1708‐1775), originally educated within the Neapolitan school of composers. As a court composer in Parma he produced several Italian operas such as Olimpiade and La buona figliola, still awaiting modern revival. His move to Paris in 1757 proved decisive, and four years later he became music director of the Théâtre Italien, where he produced many light operas such as this example, which is as unfailingly charming and humorous as it is now little known.

Whereas most previous examples in the French opéra‐comique tradition were heavily dependent on pastiche and borrowing to create an effervescent but ephemeral entertainment, Duni worked hard to innovate within the genre and unify it. Despite the limitations of the small pit and resources available at his disposal in the Théâtre Italien, there are many telling orchestral details in this one‐act pastoral, scored for pairs of oboes, bassoons and horns with strings and continuo. Pleasingly for English audiences, there is a scene in which the eponymous milkmaid cries over spilt milk; a role once apparently taken in a Versailles performance by Marie Antoinette herself.

Presented here is the works only available recording, made during a run of performances in 2010, given by Polish singers and period instrumentalists led by the countertenor and conductor Roberto Balconi, who has recorded madrigals by Giovanni Ghizzolo (BC94834) with his other ensemble, Fantazyas. The booklet includes a contextual essay and the French libretto.