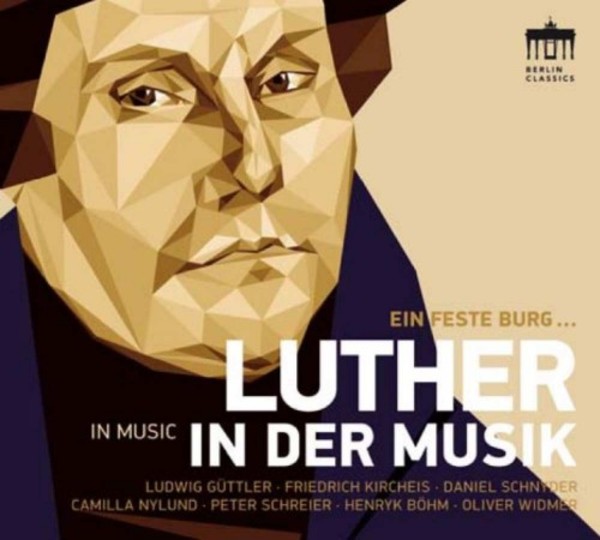 A Man of his Word  And of Music

He who can exercise this art is of good disposition, fit for all duties. The album Luther in Music opens an unusually varied chapter in music history, ranging from the first 16th‐century arrangements of Luther's hymns to the sacred music of the 21st century. The initiator of this development was in every sense a man of his word: Martin Luther. A safe stronghold our God is still, / a trusty shield and weapon. / Hell help us clear from all the ill / that hath us now oertaken. So begins the fine translation by Thomas Carlyle (1795‐1881) of the hymn Ein feste Burg ist unser Gott. The sequence of works on this CD can be understood as an audio history of one of the most important hymns of the Protestant Reformation. It first appeared in 1533 in Martin Luthers book Sacred songs newly amended at Wittemberg (the Klugsches Gesangbuch). Luther wrote the words, no doubt the tune too. And many years later composers re‐set and rearranged his work.

Martin Luther wrote several dozen hymns for all the Christian festivals too. Vom Himmel hoch, da komm ich her (1535) is one of his best known. Some of the adaptations by Eccard, Praetorius or Bach (from the Christmas Oratorio) are to be heard on this CD. Schooled in the Protestant tradition, the trumpeter and conductor Ludwig Güttler regards Luther as a constant point of reference. He acknowledges the great reformers current relevance: A man like Martin Luther, who in the face of all opposition finds a way, goes his own way, with this faith in God, this strength, this fearlessness, insight and perseverance, and who never wearies of praising music as second only to theology, makes use of it and reveals himself as a thoroughly musical person, is more than role model and inspiration for us; he is our strong companion.

A world premiere and first recording top the album off. The composer, saxophonist and flautist Daniel Schnyder engages with Luthers Feste Burg and creates his own version in the musical form of an oratorio. This work was commissioned by the Frauenkirche Dresden to mark the Luther Decade. Schnyder about Martin Luther: I am fascinated by his courage, his anarchic streak, his willpower and his skill. Luthers contemporary Huldrych Zwingli demanded: Do something brave! Luther did just that!