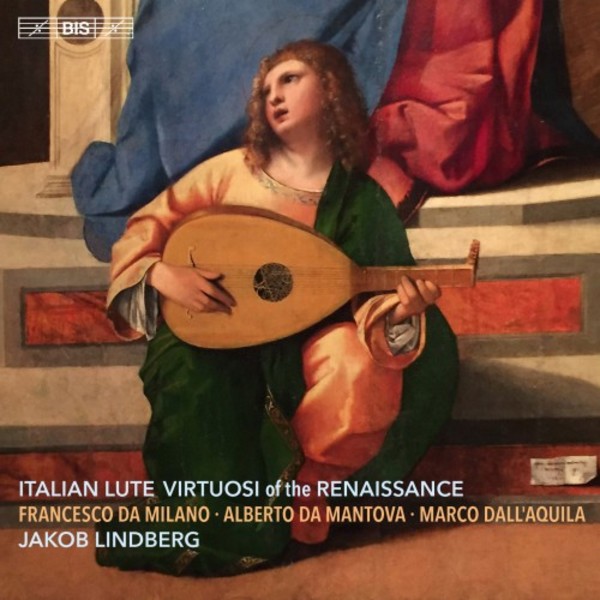 Italian Lute Virtuosi of the Renaissance

Lute pieces by three Renaissance virtuosi performed by one of today's finest lutenists. The lute flourished for more than five hundred years, until its decline towards the end of the eighteenth century, and for large parts of that time it was the most important instrument in all of Western music. One such golden period was the 1500s, and some of the most exciting developments, at least during the beginning of the century, took place in Italy. These included the first instances of printed lute music as well as changes to the instrument itself, but also the emergence of virtuoso players who also composed for the lute.

On this disc Jakob Lindberg, one of the great lutenists of our time, pays tribute to three colleagues from 600 years ago: Francesco da Milano, Marco dallAquila and Alberto da Mantova. All three were famed performers: da Milano was employed by three successive popes, and da Mantova was for some 20 years the best-paid of all the lutenists at the royal court in France, where he was known as Albert de Rippe. They also composed, with dallAquila  the oldest of the three  famously receiving in 1505 a 10-year privilege from the doge of Venice to publish lute music. During this period, lute music fell into three broad categories: fantasias (or ricercars), intabulations (arrangements of vocal music) and dances. For his generous recital, Lindberg has selected 26 pieces from these categories, ordering them in seven suites for the greatest possible variety.

Jakob Lindberg features on some 35 discs in the BIS catalogue, and the latest offering fits in well with earlier releases such as his survey of Jacobean Lute Music (BIS2055), named an Editors Choice in Gramophone, and a programme of Italian music for chitarrone (BISCD1899), described as an outstanding release in Classical Guitar Magazine.

Encompassing Fantasias and Ricercars, song intabulations and dances, Lindbergs own suavity of sound creates its very own soul music, especially in the Fantasias by da Milano that bookend the disc and are woven throughout. Theres a sense of eavesdropping on a spontaneous yet eloquently-argued soliloquy. ... A captivating conspectus of a golden age aglow with confidences and delights.  Paul Riley (Instrumental Choice)
BBC Music Magazine February 2017