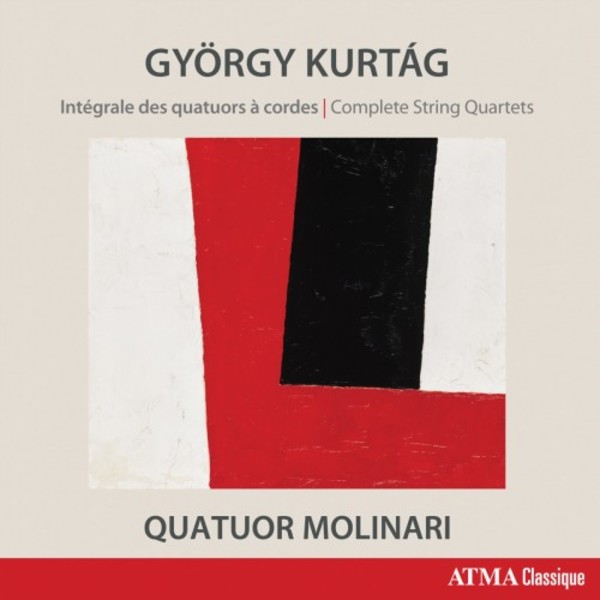 The 90-year-old Hungarian composer György Kurtág has recently devoted his efforts almost exclusively to composing chamber music. The Molinari Quartet presents the composers complete string quartets on this new recording.
Strongly influenced by the Vienna school (Webern and Schoenberg), and by Pierre Boulezs Domaine musical concerts, Kurtág wrote his first string quartet in 1959, and with it launched his career as a composer. It was followed by a series of works referencing composers, performers, and friends he admired. Olga Ranzenhofer, first violinist with the Molinari Quartet says, "Kurtágs music is always very personal, immediately recognizable, and stamped with characteristic depth and expression."

Recipient of eighteen Opus Prizes awarded by the Quebec Music Council to recognize musical excellence on the Quebec concert stage, the Molinari Quartet is an "essential" and "prodigious"  ensemble, "Canadas answer to the Kronos or Arditti Quartet".

This disc makes a slender and massively significant collection  43 pieces, the longest of which lasts barely four minutes; most are considerably shorter. Though groups such as the Keller and Arditti quartets have extensively recorded these pieces, there appears to have been just one complete survey of Kurtágs quartets before  by the Athena Quartet on a Neos disc released five years ago  but now not easily obtainable, in the UK at least. That gives the Montreal-based Quatuor Molinari the field to themselves, and in general they make the most of it. ... They can be rather forthright and insistent, sometimes almost relentless, but they never leave any doubt about the seriousness and profundity of this music, nor about its intrinsic greatness.  Andrew Clements
The Guardian 19 October 2016