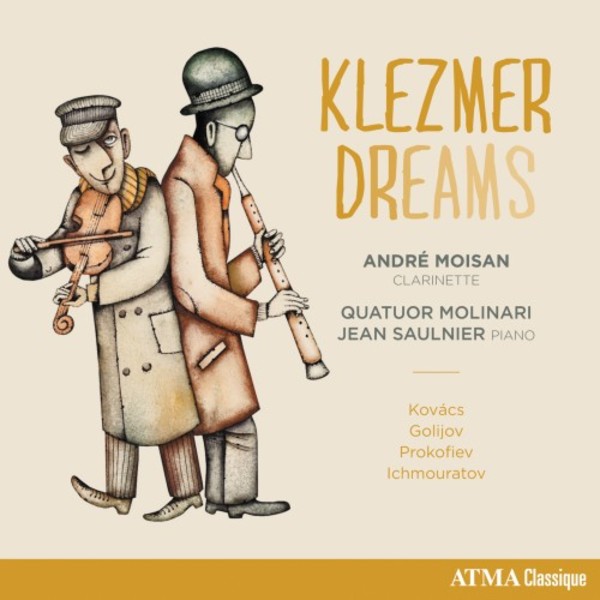 The Dreams and Prayers of Isaac the Blind, for Klezmer clarinet and string quartet

One Day of an Almost Ordinary Life

The Dreams and Prayers of Isaac the Blind, for Klezmer clarinet and string quartet

One Day of an Almost Ordinary Life

Clarinettist André Moisan, pianist Jean Saulnier, and the Molinari Quartet immerse themselves in the poignant and festive world of klezmer music. Their new recording "Klezmer Dreams" includes Overture on Hebrew Themes, Op.34 by Prokofiev, One Day of an Almost Ordinary Life by Airat Ichmouratov, Sholem-alekhem, rov Feidman! by the Hungarian composer Béla Kovács and Osvaldo Golijovs enigmatic The Dreams and Prayer of Isaac the Blind.

André Moisan is known for his consummate mastery of the instrument, his impressive musicality and the clarity of his playing. Since 1977, he has made regular concert and radio appearances as a soloist and chamber player. His numerous concerts abroad, in particular at Carnegie Hall, the Amsterdam Concertgebouw and Radio-Berlin, established him as a leading performer. In the orchestral field, Mr. Moisan has worked under renowned conductors, mainly with the Orchestre symphonique de Montréal. He first performed with that Orchestra in 1977, under Andrew Davis, and made his first solo appearance in 1997 with Charles Dutoit. Since May 1999 he has held the position of principal saxophone and bass clarinet. Besides his work as a concert and recital artist, André Moisan is also a conductor. Winner of many awards, André Moisan was nominated for Opus prizes in four consecutive years as soloist, chamber-music player and conductor. André Moisan is known for his eclecticism. Hes always crossing musical borders  to move from classical music to jazz, via klezmer and world music, for instance  so as to explore different styles. He currently teaches at the Université de Montréal.

Jean Saulnier has a very active career as a soloist, chamber musician, and as a teacher. He has acquired considerable experience over the years with the solo repertoire and with chamber music. He is a sought after partner because of his ease, suppleness, and sensitivity as a listener. Jean Saulnier has won numerous prizes, including the Prix dEurope and prizes awarded at national and international competitions, such as the prestigious William Kapell and Leschetizsky competitions. He is active on the Canadian and foreign musical scenes, and can be heard frequently at the major Canadian music festivals and on CBC radio. Jean Saulnier studied with Marc Durand, Leon Fleisher, and André Laplante. He is currently full professor at the music faculty of the Université de Montréal. He also teaches at the Orford Arts Centre and the Gijón international piano festival during the summer.

Internationally acclaimed by the public and the critics since its foundation in 1997, the Molinari Quartet has given itself the mandate to perform works from the 20th and 21st centuries repertoire for string quartet, to commission new works and to initiate discussions between musicians, artists and the public. Recipient of eighteen Opus Prizes awarded by the Quebec Music Council to underline musical excellence on the Quebec concert stage, the Molinari Quartet is described by the critics as an essential and prodigious ensemble, even Canadas answer to the Kronos or Arditti Quartet. In addition to many Canadian works, the Molinari Quartets repertoire includes among others, quartets by Bartók, Berg, Britten, Corigliano, Debussy, Dusapin, Dutilleux, Glass, Gubaidulina, Kurtág, Ligeti, Lutoslawski, Penderecki, Prokofiev, Ravel, Rihm, Schnittke, Schoenberg, Shostakovich and Webern. The Molinari Quartet was heard twice as soloist with the Montreal Symphony Orchestra under Charles Dutoit and was invited to perform in numerous concert series and festivals throughout Canada, the United States, Mexico, China and Europe. Launched in October 2001, the Molinari Quartet International Competition for Composition has had an enormous success. Over its six editions it has received over 750 new quartet scores from 65 countries.