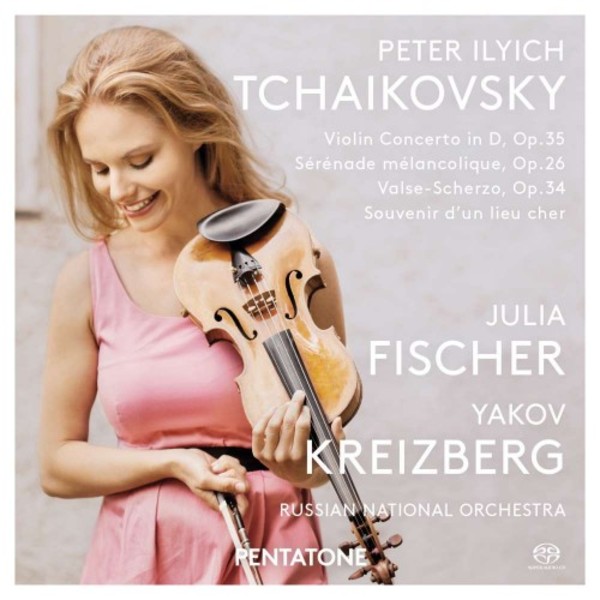 Reissue of PTC5186095
PTC5186095
PTC5186095
PTC5186095
The entirety of Tchaikovsky's repertoire for solo violin, including his only concerto for the instrument, was written during a period of remarkable turbulence between 1875 and 1878. His recent marriage to Antonia Milyukova had plunged the composer into nearly-suicidal depression, and for a brief time his preferred method of expression became an instrument he had generally shunned early in his career.

The most notable product of this anguish was Tchaikovsky's Violin Concerto in D, a work that swings widely between extremes as wide as Russian gypsy music and Western European-influenced Romanticism. At the time it was deemed unplayable, and even virtuoso violinist Leopold Auer turned down the offer to premier the piece because of its technical difficulty. Of course times have changed, and Pentatone artist Julia Fischer began playing the piece at the age of 14. This release marked the fourth collaboration between Fischer and the late Russian conductor Yakov Kreizberg, and their second to feature the Russian National Orchestra. Together they recorded four of Tchaikovsky's greatest works from this period, which amount to some of the most expressive and difficult music written for the violin.

Tchaikovsky's Violin Concerto in D provides the backbone for the album, but there are plenty fireworks in the Valse-Scherzo, another supposedly unplayable piece that has since attracted considerable interest from violinists. In contrast, the Sérénade mélancolique conveys "melancholic passion, hopeless yearning and bitter thoughts of death," according to Tchaikovsky biographer Richard Stein. For Souvenir d'un lieu cher, the final composition on the album, Kreizberg takes a seat at the piano to join Fischer in an intimate duet brimming with nostalgia.

Warning: Unknown: Failed to write session data (files). Please verify that the current setting of session.save_path is correct (/var/lib/php/session) in Unknown on line 0