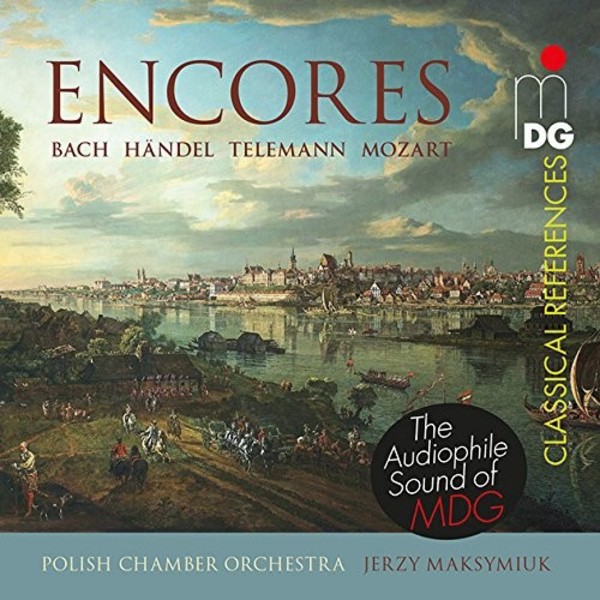 » Sinfonia: Arrival of the Queen of Sheba

Divertimento in B flat major, K137 'Salzburg Symphony no.2'

» Sinfonia: Arrival of the Queen of Sheba

Divertimento in B flat major, K137 'Salzburg Symphony no.2'

More than thirty years ago the MDG team traveled to Warsaw to record chamber compositions by Béla Bartók and Benjamin Britten with the Polish Chamber Orchestra and critics acclaimed the recording as the absolute benchmark for the Divertimento and the Bridge Variations.
The association was concluded sooner than planned, so a decision was made to use the remaining time to produce encore pieces from the orchestras repertoire. Now being released for the first time on CD, it coincides with conductor Jerzy Maksymiuks eightieth birthday.
For many years he was the principal conductor of this ensemble known today as the Sinfonia Varsovia and played an influential role in its history. He ranks with Yehudi Menuhin, Krzysztof Penderecki, and, most recently, Marc Minkowski as musicians who have had an impact on the orchestra.
The disc includes The Entrance of the Queen of Sheba and the Badinerie from Bachs Suite in B minor as well as Eine kleine Nachtmusik and Telemanns Ouverture à la Pastorelle. It covers an entertaining spectrum of orchestral miniatures rightly regarded as popular favourites.