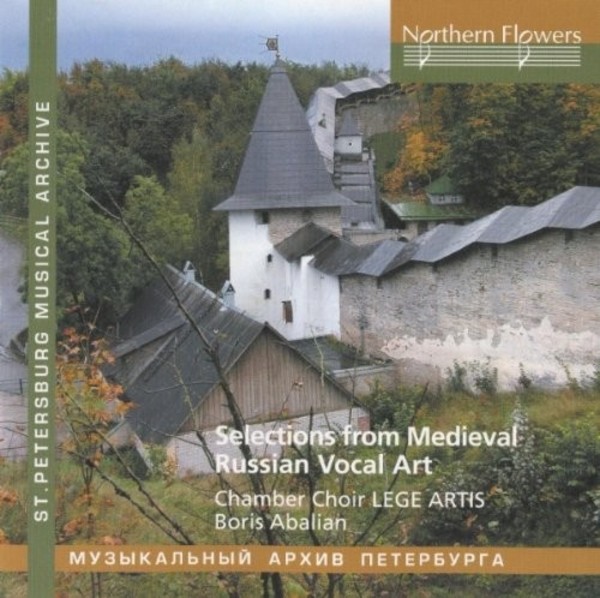 The legend of adoption of Christianity in Russia as stated in the Chronicle of Years and Times has it that the unprecedented beauty of divine service was the main reason for choosing the Byzantine model of Christian faith. Church singing heard by Prince Vladimirs ambassadors in Constantinople amazed them with its delightful beauty. The Byzantine aesthetics inheriting the Platonic doctrine of identity of beauty, truth, and deity proved to be very close to the heart of ancient Slavs, and had a tremendous impact on generation of a new professional singing culture in Russia.
Znamenny chant, a greatest achievement of medieval culture, was the core chant in singers repertoire over the whole history of sacred singing in Ancient Russia. New styles of singing, Putevoy and Demestvenny chants, appear in the second half of the 15th century. The Putevoy chant competed with the Znamenny in popularity, and was a nationwide model along with it. The demestvenny chant is one of the most beautiful melismatic chants in the vocal heritage of Old Russia.
In the second half of the 17th century, Russias vocal culture was enhanced with Bulgarian and Greek chants imported by Ukrainian singers. Emperor Peter the Great was a great devotee of Greek singing. At the same time, psalmas (fm. Polish psalm) appear in Russian lands under the influence of book songs translated from Polish. Psalmas, or sacred songs, were written to religious texts and performed in family circles in hours of leisure, instead of secular song.
Another impressive branch of the ancient Russian art of singing is professional polyphony. The sound of early Russian polyphonic chants is unusual for todays audience. Their line compositions are based on a protracted putevoy chant braided with background voices. Added to demestvenny polyphony was a striking, rhythmically active demestvo part. Russian Tsar Alexey Mikhailovich, father of Peter the Great, was taught line singing as a child, and afterwards collected a remarkable music library.
However, as early as in the reign of Alexey Mikhailovich, the line singing was challenged by a kind of polyphony based on the harmonic and scale principles of Western European music. It was Partesny singing (fm. Latin partes, a choral part), the advent of which is related to the name of Patriarch Nikon. As soon as in the last quarter of the 17th century, the partes starts its solemn march across Russian lands. Under its influence, the znamenny polyphony was developed to combine the new and the old, i.e. the harmony and the linearity of melodic thinking.
Contents:
1 A Great and Marvelous Wonder 2:16
2 All Creation Rejoices in Thee 1:58
3 The Three-Lamped Light 2:21
4 Shine, Shine, O New Jerusalem 1:51
5 Adorn Thy Bridal Chamber, O Zion 3:14
6 This Is the Day of the Lord: Rejoice, Ye People 3:35
7 Gabriel Announces the Good Tidings 3:36
8 The Angel Cried Out to Her Who Is Full of Grace 1:45
9 With All Peoples Let Us Honor and Glorify 4:05
10 It Is Meet 3:02
11 We Bless Thee, Virgin Birthgiver of God 2:09
12 Standing Today at the Cross 6:24
13 Thy Nativity, O Virgin Birthgiver of God 1:39
14 To Rest in the Arms of the Elder 2:11
15 Beholding Thee Hanging Upon the Cross 1:36
16 Weep Not For Me, O Mother 3:09
17 To Behold, O Virgin, the Ressurection of Thy Son 1:14
18 Today the Virgin Gives Birth to Him Who Is Above All Being 2:25
19 The Angel Cried Out to Her Who Is Full of Joy 3:24
20 Glorious Are Thy Mysteries, o Pure Lady 2:11
21 Magnify, O My Soul 0:50
22 Shine, Shine, O New Jerusalem [Greek Chant] 2:28
23 Today the Temple That Is to Hold God 4:21
Recorded in Veliky Novgorod, Znamenny Church, 16-18 November 2001