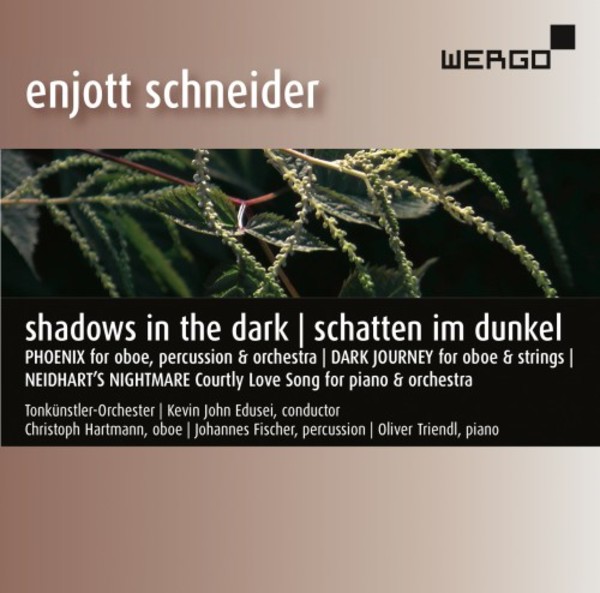 Enjott Schneider - Shadows in the Dark

Shadows in the Dark is the fifth of 10 CDs in Wergos continuing Edition Enjott Schneider. This time, Enjott Schneider presents two solo concertos and a double concerto, inviting the listener on an emotional journey into the darkness of mythology, the psyche, and the past.

Schneiders Phoenix refers to the legendary bird known as a symbol of immortality, resurrection, and life after death: the phoenix incinerates itself so that it can rise again in constantly repeating cycles. The concerto of the same name, which initially was conceived to symbolize the eternal rebirth of beauty from chaos, ruins, and ashes, took on an oppressive reality dominated by suffering, leave-taking, and grief.

Neidharts Nightmare, a minnelied for piano and orchestra, alludes to the darkness of the Middle Ages and the coarse poetry of Neidhart von Reuental (c. 1180-1240), the most popular Minnesinger of his age. In an aggressive dance, Enjott Schneider illustrates the poets fear of stifling dance halls and aggressive, loutish peasants  images that haunted Neidhart like a nightmare.

Dunkelreise (Dark Journey) is a psychological study of a figure from the period of high Romanticism. This oboe concerto is based on fragments of music by Hans Rott (1858-1884), a brilliant composer and Bruckner pupil who died at the age of 26 in an asylum and from whom only a few complete works survive. From selected pieces by Rott, Enjott Schneider developed an imaginary narrative that alternates between madness and reality. Consolation and hopeless maniacal searching are combined to lead the listener on a harrowing journey into the dark night of a fading psyche.