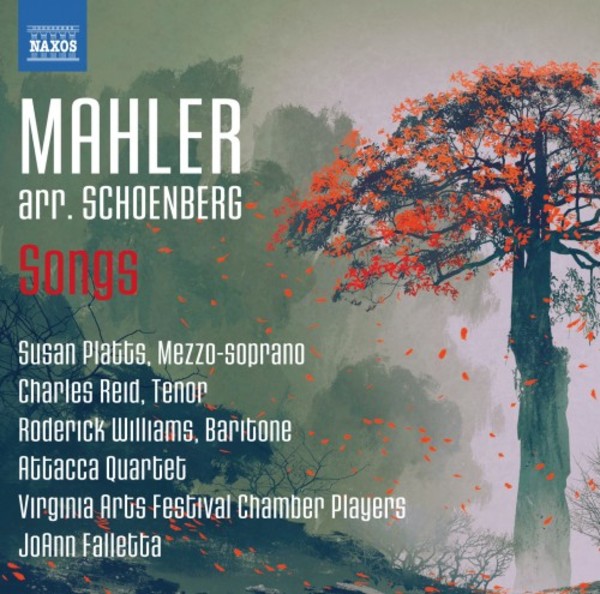 Arnold Schoenberg founded the Society for Private Musical Performances in 1918 to perform contemporary music from Mahler to the present. Mahler had been an early supporter of Schoenbergs music, and Schoenberg repaid the favour by arranging Mahlers orchestral works for chamber ensemble and including them at the societys concerts. The colourful Lieder eines fahrenden Gesellen are given a feel of great intimacy in this form, while the lighter scoring of Das Lied von der Erde has the advantage of clarifying instrumental textures, its magical effects capturing the finite nature of earthly things.

Interest in Schoenberg and his circles arrangements of orchestral works for chamber ensemble for his Verein für musikalische Privataufführungen has grown considerably in recent years, with recordings of the chamber version of Mahlers Fourth Symphony alone already having appeared on the Avie, Linn, Dorian and ABC Classics labels.

The Schoenberg arrangements of Lieder eines fahrenden Gesellen and Das Lied von der Erde have also proven popular, but our release can boast a world-beating team of musicians. Conducted by the Grammy Award-winning JoAnn Falletta, soprano Susan Platts is a celebrated and Rolex-Prize winning Mahlerian soloist who has performed Das Lied von der Erde to great acclaim all over the world. Baritone Roderick Williams is connected with every major UK opera house, singing concert repertoire with the BBC orchestras and internationally, as well as appearing in major operatic premières by composers such as Sally Beamish and Robert Saxton.

Central to the ensemble for these recordings is the multiple award-winning Attacca Quartet, recognized as one of Americas premier young ensembles. The Virginia Arts Festival Chamber Players recently appeared on the new Naxos recording of Stravinskys The Soldiers Tale (8573537), also conducted by JoAnn Falletta, and described by Graham Rickson of The Arts Desk as phenomenally good Highly enjoyable, and possibly the best modern recording of an important, influential work.