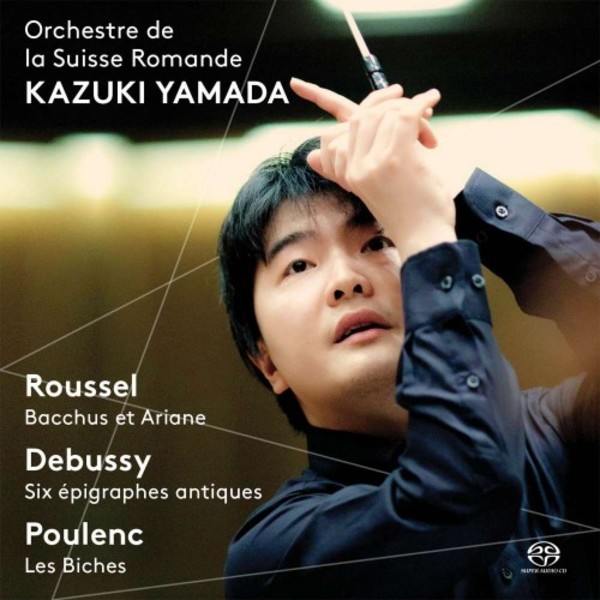 Vibrant, striking colours, sensuous harmonies and coruscating wit abound in this irresistible collection played by the Orchestre de la Suisse Romande (OSR) under the baton of the young rising star Kazuki Yamada. Hailed by Gramophone magazine as a gifted, budding maestro with interpretative nous, strength of personality and scrupulous attention to detail, this is Yamadas fourth outing or PENTATONE following his three critically acclaimed releases of dance music.

The three works featured are firmly rooted in the past, whether in the sources for inspiration or the sometimes neo-classical style. But the musical language is unmistakeably from the 20th century nd, above all, quintessentially French.

Featuring incisive rhythms, expressive melodies and daring harmonies realised with a sumptuous orchestral palette, Albert Roussels exotic suites for the ballet Ariane et Bacchus are popular showpieces with orchestras and audiences alike, especially the famous Bacchanale an uninhibited romp which closes the work. Debussys nod to classical Greece in his beguiling Six épigraphes antiques, sometimes described as a conspectus of his compositional technique, is heard here in luxuriant detail in a rarely performed orchestration by Ernest Ansermet, the founder of the OSR. And Poulenc has never been in more high spirits than in Les Biches, a heady, infectious concoction which bristles with sophistication, charm and irrepressible Gallic wit.

The BBC SO have found a star in the making, wrote The Telegraph of Kazuki Yamada lets hope we hear more of him. Winner of the prestigious 51st International Besançon Competition for Young onductors in 2009, Yamadas rise on the international stage has been rapid. With his busy schedule, he is one of todays most sought after conductors and in September 2016, he takes over as principal conductor and artistic director of the Orchestre Philharmonique de Monte-Carlo.