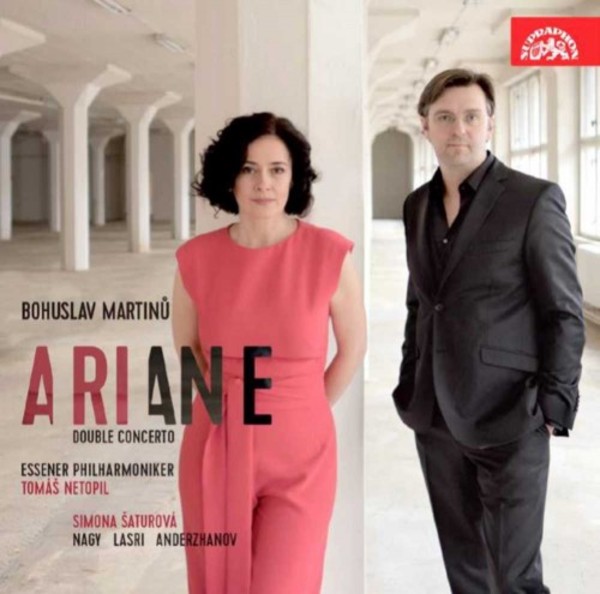 A great story within a single act  the dreamy Ariane of Simona aturová and Tomá Netopil.

I am writing a new small opera, a one‐acter, as I would also like to have a rest from the grand‐scale opera, The Greek Passion, which has taken its toll. Martinů composed Ariane within a mere month, in the summer of 1958. The Greek myth of Ariadne, the daughter of Minos, King of Crete, who helps Theseus slay the Minotaur, has been set to music by a number of renowned composers. Martinů was captivated by Georges Neveuxs drama Le Voyage de Thésée, on which he based his own libretto. Theseus is portrayed as a split personality, struggling with himself and overwhelmed by love for a woman.

Tomá Netopil and his Essener Philharmoniker have made a new recording of the opera some 30 years after the one created by Václav Neumann and the Czech Philharmonic. An extraordinary account of the title role is given by Simona aturová, whose final lament as the abandoned Ariane is simply breathtaking.

Besides the opera, the CD also features the Double Concerto, a work representing the apex of the composers French period and written amidst dramatic circumstances. Martinů began sketching it in the summer of 1938, at a time when a tense atmosphere dominated Europe, and this omnipresent fear and discomposure are also reflected in the piece:  I have the impression that the tragic events, which we still remember  and this fraught atmosphere is engraved on these very pages. Martinů duly imbued it with his strong emotions relating to the fate of his homeland: It is a piece lived through under difficult circumstances, yet it possesses neither despair nor gloom, but implies revolt, courage and an unshakable faith in the future, expressed by means of abrupt dramatic surges, a current of notes that does not stop for a second

We might hear more of Ariane, Martinůs penultimate opera, if it were not so couched in of-its-time, 1950s psychology: the Minotaur is effectively Theseuss alter ego, and the demons he must slay are his own  you know the drill. As it is, this recording, made live in 2014 in Essen, is the first in around 30 years  and its very much worthwhile, thanks to a strong, idiomatic cast, conductor Tomá Netopils sympathy with the score, and the Essen orchestras flowing, characterful performance.  Erica Jeal
The Guardian 19 August 2016