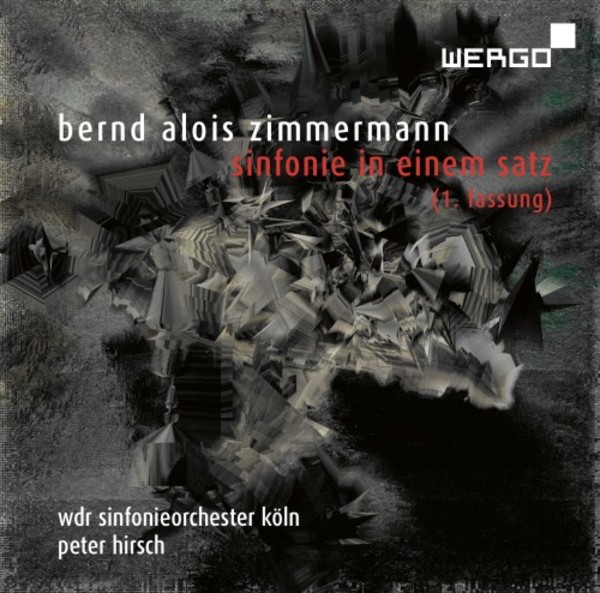 Bernd Alois Zimmerman began to study school music in Cologne a year before the outbreak of the Second World War, but was drafted into the army in 1939. He served for three years, finally being discharged because of chronic skin problems as a result of exposure to poison. This experience, his analysis of the war and the phenomenon of time, characterizes an oeuvre that developed in a startlingly short period of time.

The works compiled on this CD emphasize, in a richly varied manner, Zimmermanns conception of music as the ultimate 'art of time' in which different temporal layers permeate each other, thus eliminating historicity.

The premiere of his Sinfonie in 1952 was harshly criticized; Zimmermann then promised to present himself as a more experienced orchestrator in the future and immediately thereafter rewrote the piece, making major revisions and changing the title to Sinfonie in einem Satz [Symphony in One Movement]  the title we know today. In his revision of the Sinfonie, Zimmermann shortened and tightened certain formal elements. In a later commentary, he said that 'the strongly rhapsodic character  was restrained in favour of a more compressed presentation'.

The ballet suite Giostra Genovese is a piece made up entirely of collages, based on dances from the 16th and 17th centuries and interspersed with quotations from historical and contemporary composers. The principle of this arrangement is that of a deliberate anachronism (Zimmermann).

The result of collage and decollage, after many revisions, finally culminated in the Musique pour les soupers du Roi Ubu [Music for King Ubus Dinner]. Zimmermann rightly referred to this work as a ballet noir. To this day, it has remained one of the darkest, most provocative, and politically incorrect works of New Music ever written.

[Zimmermanns] ballet suite Giostra Genovese is a weird marvel of anachronism, with piles upon piles of quotations and non sequiturs; Music for King Ubus Dinner is a ballet noir from 1966 that still sounds politically incorrect. This WDR album contains both those works, plus the Concerto for String Orchestra, all performed with a meticulously menacing, deadpan sense of drama. The disc opens with the original, 1951 version of the Sinfonie in Einem Satz in all its lush, surreal, supremely foreboding glory. Zimmermann would later revise the score to make it more concise and regulate the bizarre instrumentation, but the grim organ in the original is marvellously creepy. This music has a terror that shouldnt be softened, and conductor Peter Hirsch squares up unflinchingly.  Kate Molleson
The Guardian 26 August 2016