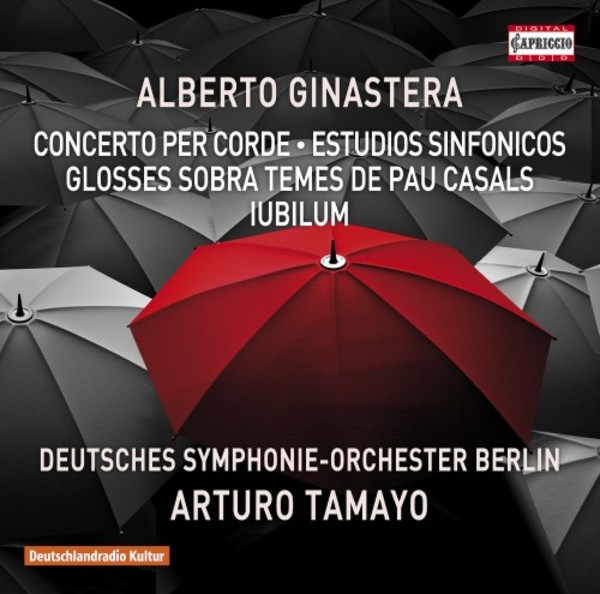 After achieving independence from Spain, Argentina developed its own models for concert- and opera-going, even though these continued in many respects to reflect European traditions. Musical legends emerged during this time: Astor Piazzolla, the founder of the Tango Nuevo, Mauricio Kagel, Carlos Gardel and Alberto Ginastera, the man considered for decades to be the country's most significant composer of classical music. Three of the works recorded on this CD fall into Ginastera's final Neo-Expressionist period: the Concerto per corde Op.33 (1965), cast in a classical, four-movement form; the Estudios sinfonicos Op.35 (1967), which represent Ginastera at his most adventurous with the avant-garde style; and the Glosses sobra temes de Pau Casals Op.48 (1976/77), in which Ginastera experiments by taking traditional themes by the great Spanish cellist Pablo Casals and holding them up to an avant-garde mirror.

All four of the works on this Capriccio disc ... belong to the last phase of Ginasteras composing life, which began in the late 1950s and continued until his death in 1983. His music became neo-expressionist (his own description), and freely incorporated elements from the postwar European avant garde, including serialism and the use of microtones and chance procedures. ... At the end of this life Ginastera seemed to be retreating from his expressionist extremes towards a style much closer to that of his earlier music. Jubilum, composed in 1980 to celebrate the 400th anniversary of the founding of Buenos Aires, maintains the high levels of dissonance but combines them with music that is much more obviously celebratory. Like all the pieces here, it uses a huge orchestra with virtuoso brilliance; Arturo Tamayos performance with the Berlin Deutsches Symphonie captures every bit of that brilliance, and they make sure they extract all the dramatic power out of the other pieces in this very useful collection too.  Andrew Clements
The Guardian 12 August 2016