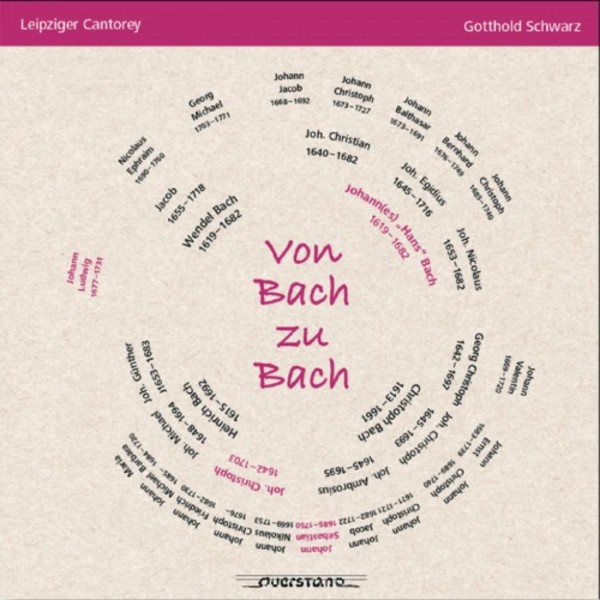 From Bach to Bach

Undergoing complex changes of form, the motet enjoyed its heyday in the period from the end of the 15th to the end of the 17th century, before in the first half of the 18th century being increasingly replaced by the cantata. For over two centuries members of the Bach family held musical posts, mainly in Thuringia. And of course, they also composed motets. The nine works to be heard on this CD show the composition of motets by members of the Bach family spanning three generations and peaking in Johann Sebastian Bachs works where we already can notice the replacement of the motet by the cantata.
The Leipziger Cantorey was founded in 2012. It brings together members of the MDR Radio Choir Leipzig to form a professional vocal ensemble, which as partner of the Sächsisches Barockorchester has dedicated itself to Baroque performance practice. Performing as a chamber choir, the singers devote themselves primarily to the interpretation of vocal music from Praetorius to Bach, from Monteverdi to Handel. From Bach to Bach is the debut CD of this ensemble, led by its founder and current acting St. Thomas Cantor, Gotthold Schwarz.