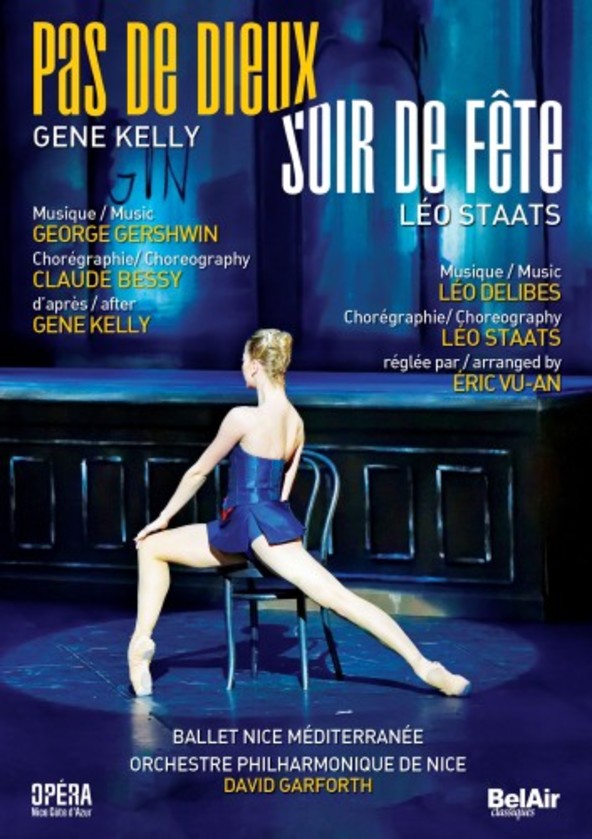 Pas de Dieux tells the story of Aphrodite and Eros, who descend to earth. On the beach where they have landed, the ardent goddess and mischievous god seduce respectively a lifeguard and his fiancée. These newly-formed couples bask in the pleasures of love. Just when the beautiful Aphrodite is dancing with her suitor, Zeus arrives to win back his fickle wife, and everything returns to normal. The reconciled immortals return to Olympus, leaving the humans to their earthly loves. This admirably constructed ballet by Gene Kelly faithfully follows the three movements of Gershwins Concerto in F. The choreography is snappy and full of fantasy, each step a gag. Dancing while rolling the shoulders, knees bent and feet turned in perhaps constitutes an approach contrary to laws of aesthetics but it certainly complies with those of humour.

A choreographer appreciated by Balanchine, Léo Staats is a figure from the world of dance who does not enjoy the fame he deserves. Competing in his time with the scandalous Ballets Russes, he was a brilliant albeit discreet maître de ballet and, above all, a great teacher. His choreographies had the merit of getting down to a task that was considerable at the time: restoring to favour the role of the male dancer, which the 19th century had relegated to that of simple bearer. With Soir de Fête, a work from 1925 with music by Delibes, we witness the remarkable renaissance of the male dancer, leaping and moving freely alongside his female partners. This choreography ideally illustrates the end of a counterproductive male/female antagonism that had finished by draining dance.