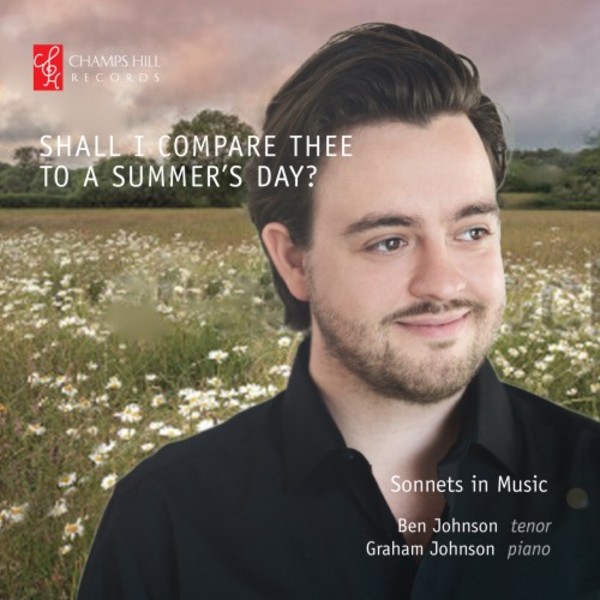 Shall I Compare Thee to a Summers Day: Sonnets in Music

Ben Johnson is accompanied by duo partner Graham Johnson in a new recording of timeless sonnets and poetry by Shakespeare, Petrarch and Michelangelo (amongst others), all set to music by British, French and German composers.
This programme of 19th- and 20th-century songs shows how the influence of great literature has proven irresistible to composers. Ben Johnson introduces the inspiration for the programme: Though the sonnet originated in Italy, it is Wales that I have to thank for the genesis of this programme. Cardiff-bound for the Singer of the World competition, I set my mind to choosing a Song Prize recital that could somehow be linked together yet also offer a great range of repertoire. After many a false start, I came across Schuberts settings of Petrarch (in Schlegels translation). This led me to the famous Liszt settings that were already in my repertoire. And so the idea was born. This enduring poetic form seemed the perfect glue to bind musical settings from across the centuries, encompassing such an incredible variety of musical styles and personal approaches from composers.
Alongside the more well-known works the programme includes two lesser known settings of Sonnet 43 (When Most I Wink...)  one by French composer Henri Sauguet and the second by English composer David W. Bowerman (composed at Champs Hill where the recording was made).
Ben Johnson represented England in the BBC Cardiff Singer of the World 2013 and won the Audience Prize. Winner of the Kathleen Ferrier Awards in 2008, and 2011 Wigmore Hall Emerging Talent, Johnson is currently an English National Opera Harewood Artist.
Graham Johnson is recognised as one of the worlds leading vocal accompanists. He was made an OBE in the 1994 Queens Birthday Honours list and he was also made an Honorary Member of the Royal Philharmonic Society in February 2010.