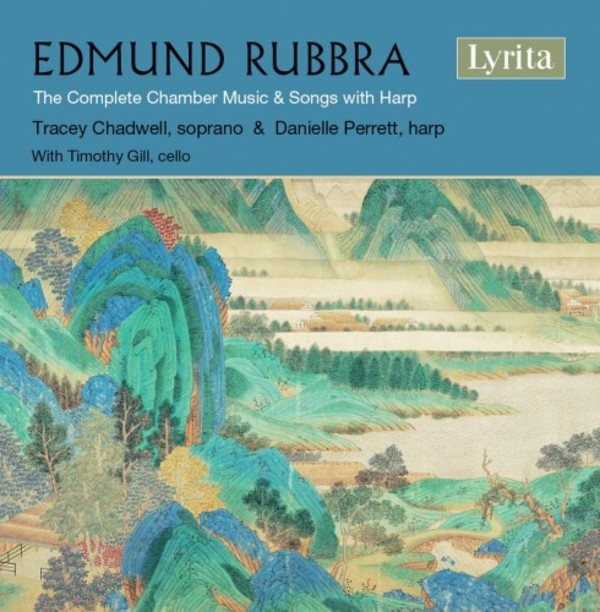 The meditative qualities in so much of the music of Edmund Rubbra (1901-86) resonate strongly with our present day search for the spiritual. This aspect of his work stems both from his roots in Western Christianity and from his lifelong interest in Eastern thought and music.
The earliest of the Orient-inspired pieces on this disc is the Japanese dance Fukagawa (Deep River) arranged by Rubbra in the late 1920s. It was originally written for piano, but the texture and sonority of the harp fit the piece perfectly. The Orient is again immediately obvious in the songs which comprise The Jade Mountain (1962), a song cycle for soprano and harp, setting poems from the T'ang Dynasty (618-906 AD) in translations by the American poet Witter Bynner. The work is a small masterpiece and the last song is one of extraordinary intensity. Although in no way are these pastiches of Chinese music, there is, nonetheless, a Chinese flavour to the textures, melodies, harmonies and modes used.
Rubbra's first major composition for solo harp was the Pezzo Ostinato of 1958. This time the comparison is with an Indian raga. Rubbra and his friend, ethnomusicologist Peter Crossley-Holland, had been to hear the great Indian musician Ali Akbar Khan perform in London, and this had led to the idea of writing the harp piece.
Sir Lennox Berkeley (1903-89) wrote his delightful Nocturne for harp in 1967. Today it is not often performed, which is a pity, as it is fully characteristic of the composer and is Berkeley's only work for solo harp.
Even more of a rarity is the final piece on the CD, by Herbert Howells (1892-1983). His Prelude (No.1) for harp was written in 1915 for Kate Wilson, a student at the RCM, but never published. The manuscript only came to light when Kate died and it was bequeathed to the Royal College of Music by her sister-in-law in the 1970s. Like the Rubbra masterworks for harp, this rich and yearning piece is set to count amongst the most significant in the harp repertoire.
First released on ASV CD DCA 1036 in 1998

Yet another winner from Lyrita. This is a lovely CD for enthusiasts of music for harp, for lovers of English song, and an essential purchase for anyone who enjoys the music of Rubbra. Yet the enjoyment is tinged with sadness. Tracey Chadwell, whose voice suits the songs on this CD, had been diagnosed with leukaemia in 1990. She died on 12 January 1996, at the age of 36, less than a year after recording these ten songs. The CD is a fitting memorial to her talent. Her few recordings were all in English music, and her voice demonstrates intelligence and sensitivity to text allied to unusual beauty of tone.  Michael Wilkinson (Recording of the Month)
MusicWeb International May 2016