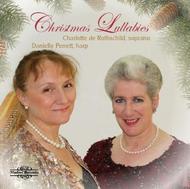 » Walking in the air

To the Queen of Heaven

I wonder as I wander (arr. Calvert)

» no.3 An old carol
The cradle in Bethlehem

» Walking in the air

To the Queen of Heaven

I wonder as I wander (arr. Calvert)

» no.3 An old carol
The cradle in Bethlehem

A selection of well-known carols and gentle lullabies on Christs conception and birth, performed by the intimate combination of harp and soprano voice.

Charlotte de Rothschilds career has taken her all over the world. With her wide knowledge of the song repertoire, from different eras, countries and genres, she has created some wonderful themed programmes, the best known being the programme which traces the musical history of her forebears with music by, and anecdotes about, the composers who were friends, teachers or ancestors of the Rothschild family during the 19th and 20th Centuries. In 2013, Charlotte presented this programme in Switzerland, Japan, Singapore and the UK.

Danielle Perrett has a firmly established career, both as a soloist and as a chamber music player. Something of a prodigy, she gained diplomas in harp playing whilst still at school and the Royal College of Music Junior Department, just five years after taking up the instrument. She studied with Daphne Boden and later Renata Scheffel-Stein and was the first person to gain a Masters degree in Performance & Related Studies at Goldsmiths College, London University. She specialises in solo and chamber music on both modern and late eighteenth century harps and her recordings have been highly acclaimed.