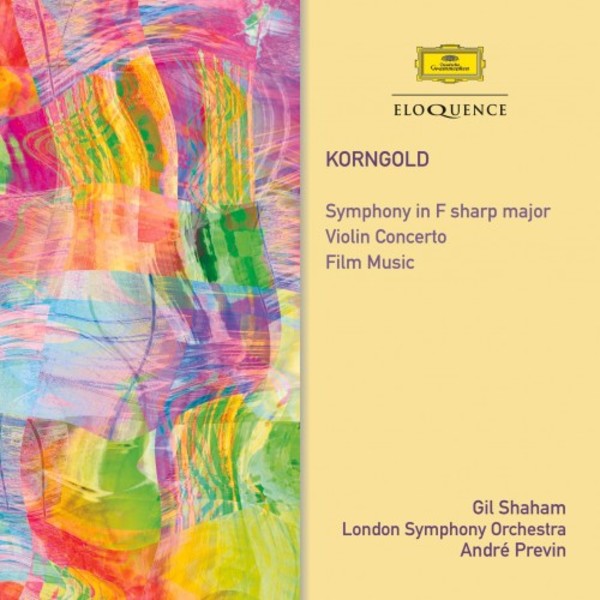 Captain Blood: Suite
Much Ado About Nothing, op.11: Suite
Symphony in F sharp major, op.40
The Prince and the Pauper: Suite
The Private Lives of Elizabeth and Essex: Suite
The Sea Hawk: Suite
Violin Concerto in D major, op.35

Captain Blood: Suite
Much Ado About Nothing, op.11: Suite
Symphony in F sharp major, op.40
The Prince and the Pauper: Suite
The Private Lives of Elizabeth and Essex: Suite
The Sea Hawk: Suite
Violin Concerto in D major, op.35

Korngolds wonderful melodies are showcased in critically-acclaimed recordings on this 2-CD set conducted by André Previn, including Gil Shahams outstanding recording of the Korngold Violin Concerto.

The great yearning melodies and the seductiveness of Korngolds orchestration are hard to resist. The sheer sweep and thrill of his music became what is sometimes called the Hollywood sound, but in no way makes him a less serious composer as this collection of works, all conducted by André Previn on Deutsche Grammophon, reveals.

His Violin Concerto was premiered by Jascha Heifetz in 1947 and remains his most popular and frequently performed piece. Its predominant lyricism stems both from the late-Romantic tradition in which he grew up as a boy prodigy composer in Vienna, and from the second career which he adopted after leaving Nazi Europe. His large-scale Symphony, which Korngold dedicated, in gratitude, to the memory of the American president, Franklin D. Roosevelt, a man he had much admired, was first introduced to Viennas music lovers, who proceeded to dismiss it, on the one hand, as atonal and, on the other, as Mahlerian and to treat it with only the greatest reserve. It is only in the last forty or so years that it has gained greater popularity in the concert hall and the recording studio.

In the summer of 1918, Korngold was invited to write the incidental music for a production of Shakespeares Much Ado About Nothing planned by the Vienna Volksbühne. In the event, the production turned out to be so lavish and expensive that by the time it finally opened on 6 May 1920, it had had to be taken over by the Schönbrunn Palace Theatre! The four spectacular suites taken from his scores for four Hollywood box office successes, clearly demonstrate the qualities that make Korngolds film music valuable away from the screen and worthy of concert performance.

Previn, a distinguished film composer himself, leads aptly vivid performances of all four suites  The London Symphony plays with all of the panache that the music requires - ClassicsToday

Shaham gives a performance of effortless virtuosity and strong profile. [] Shaham and Previn together consistently bring out the [Violin Concertos] sensuous warmth without making the result soupy - Penguin Guide to Compact Discs and DVDs