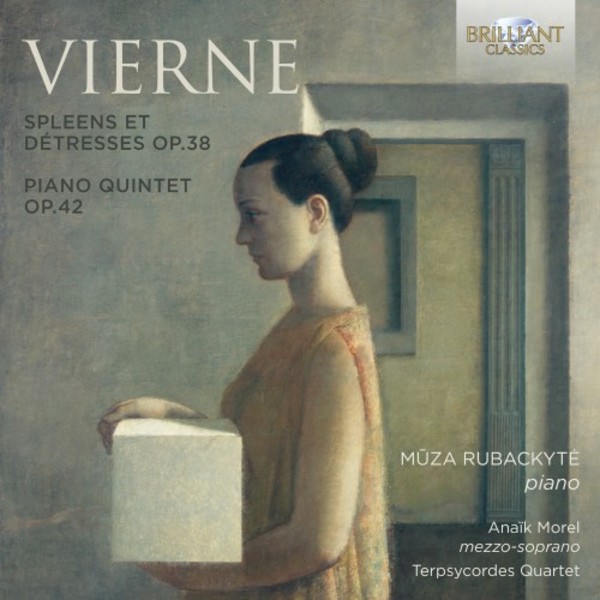 Louis Vierne (1870‐1937) is known as one of the finest French organists of his generation, and the composer of much music for his instrument such as the Carillon de Westminster and organ symphonies designed for the huge, Gothic instruments of which he was a master, but he also left a body of vocal and chamber music. This release  a unique coupling on record  comprises his two most substantial and ambitious works in those genres.

Born blind from cataracts, Vierne had limited sight restored to him as a boy, but in 1915 he began to suffer from glaucoma. At this period he composed the darkly melancholy song‐cycle Spleens et détressses, on poems of Paul Verlaine. Although these settings capture the existential ennui implied by that word spleen, they are free from the anguished nihilism of previous settings of some of the same texts and any sense of real distress is muted. A real sense of tragic outpouring is reserved for the Piano Quintet, composed some months later after Vierne had received the news of the death of his son Jacques, killed in action. This three-movement work is grim music for grim times, but remarkably contemporary, even prophetic in sound, calling more to mind early Schoenberg than late Brahms, more harmonically knotted than even Roussel or Magnard. Viernes ambition, magnificently realised, was to produce a quintet of vast proportions through every part of which shall flow the spirit of my tender feelings and the tragic destiny of my child. I shall bring this work to a conclusion with energy as fierce and ferocious as my grief is terrible.

The Lithuanian pianist Mūza Rubackytė has won critical praise for other recordings on Brilliant Classics of late‐Romantic French music, including an album of piano music by Vierne (BC95154), and the major chamber (BC93716) and piano works (BC93702) of César Franck. Of the latter album, Classics Today remarked that Rubackytes true feeling for nuance and linear projection emerges at all times... Rubackytes artistic excellence and Brilliant Classics rock‐bottom price recommend themselves.