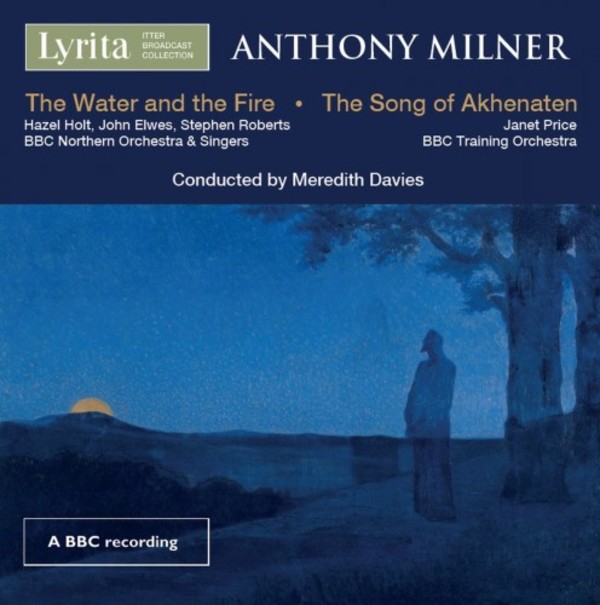 Milner - The Water and the Fire, The Song of Akhenaten

The Song of Akhenaten, op.5
The Water and the Fire

The Song of Akhenaten, op.5
The Water and the Fire

The Song of Akhenaten, op.5, is a setting for soprano and chamber orchestra of a text based on the utterance of an Egyptian pharaoh regarded as one of the early monotheists. When The Song of Akhenaten was published by Novello and Co. in 1969, the Musical Opinion critic wrote that  it is a pleasure to see a composer writing for the voice, rather than against it, whilst Peter J. Pirie described the vocal part as rewarding. This score ably demonstrates Anthony Milners sensitive treatment of texts by creating vocal lines which are both grateful and challenging to sing and by fashioning deft instrumental accompaniments that genuinely enhance his settings.

Arguably the highpoint of the composers large-scale choral writing is The Water and the Fire. Lasting around 55 minutes in performance, this substantial dramatic oratorio was completed in 1961 and premiered at Hereford Cathedral on 8 September 1964 as part of that years Three Choirs Festival. The Water and the Fire is a truly visionary piece in that Milners very personal choice of text has had a strong bearing on the character and form of the music resulting in a strikingly powerful and unified conception. The music unfolds in a natural arc, from the jagged harmonies of the opening scene to the tranquil, diatonic closing melody. It is perhaps above all an eminently balanced work counterpoising instinct and logic, passion and intellect within a convincing large-scale statement that is built to last.