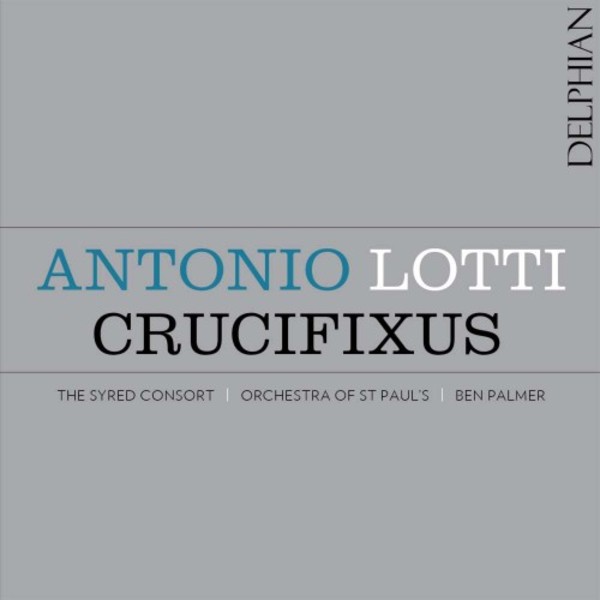 Despite a hugely prolific output spanning a career of more than 50 years, Antonio Lotti is now known almost exclusively for his eight-part setting of the Crucifixus. It is not widely known that that motet is in fact part of a complete Credo setting, itself part of the Missa Sancti Christophori that receives its first recording here.

Much of Lottis music was written for the Basilica of San Marco in Venice at a time when expense and extravagance were not spared. He often wrote daringly for much bigger forces than were usual; in reviving Lottis music, that sheer scale can present a challenge. Rhythmic shock and awe, masterful variety, incessant invention and a defiant refusal to conform make this music overripe for revival. Lotti is at the cutting edge of the galant style that prefigures the Classical era; his harmonies can be surprising, daring  even outrageous.

For their debut on Delphian, The Syred Consort and Orchestra of St Pauls have collaborated with musicologist Ben Byram-Wigfield to bring this survey of Lottis music to life. Ben Palmers singers dazzle in their virtuosity, and the instrumentalists play with immaculately crisp ensemble. There is excitement. There is hushed poignancy. And throughout there are Lottis luscious harmonies, which make this music nothing short of addictive.

The plangent dissonances of Antonio Lottis setting of the Crucifixus are well known to choral singers: here the scholar Ben Byram-Wigfield has put it back in a complete mass setting, which turns out to be a curious concoction partly by Lotti (1667-1740) and partly, adapting his music, possibly by his pupil Jan Dismas Zelenka. Both here and in another G minor Credo, Lottis music is strongly profiled, solidly baroque, with an especially expressive fugue at the end of the Gloria, then re-used in the Benedictus.  Nicholas Kenyon
The Observer 15 April 2016