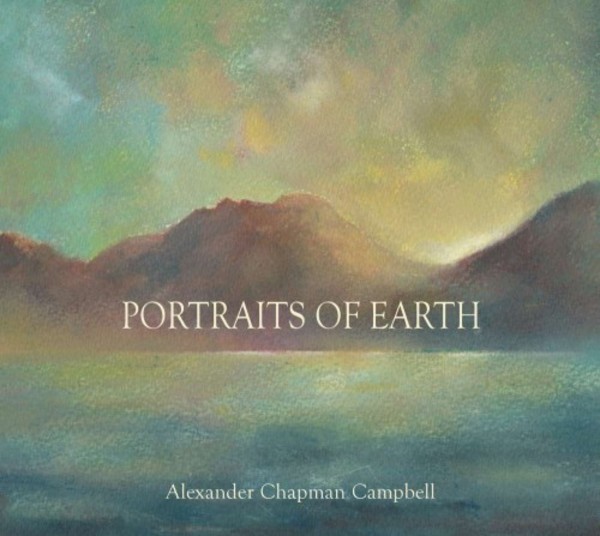 Alexander Chapman Campbell second album for solo piano, Portraits Of Earth, was recorded on the rugged West Coast of Scotland at Crear House & Studio; a stunning converted byre that sits above the Atlantic Ocean. The album, featuring new piano works that have been five years in the making, was recorded in a single take on the final morning of the sessions. In the booklet notes Alexander writes:

This is the experience of playing that I look for but only find when I stop looking for it. I revelled in it for those brief and wonderful moments. The last piece came and then the final note. The same silence, which had greeted me on that first morning, was still there, all around me... Those were the recordings I was looking for; I had just recorded the whole album in one run-through. The rest - everything I had done during the previous days - could be forgotten.

The emotive music has a magical and ethereal quality, which immediately transports listeners. The style is flowing and full of melody, yet with a great sense of depth and richness. As with his debut album Sketches of Light, this new album is accessible and will appeal to classical music lovers as well as wider audiences.

Aged 27, Alexander lives in Northern Scotland, where he gains inspiration from the natural world around him:

I chose the titles because nature has always been a source of wonder for me. Naming it in this way is a wish to acknowledge this, and to dedicate the album to the beautiful place that we all share - the living world we call Earth.

Alexander declined a place to study music at university, instead choosing to explore his music in a more solitary environment. The result, unbounded and original, has been described as not jazz, not classical, not improvised, but a glimpse of something new

Alexanders debut album Sketches of Light was voted Album of the Week on the popular Classic FM show Drive, and following a flood of emails and phone-calls after each airing, it has received continued airplay since its release in November 2013. It reached number 33 in the UK classical album charts. Sketches has been used across TV, especially by the BBC, and has featured on several chart-topping compilation albums.