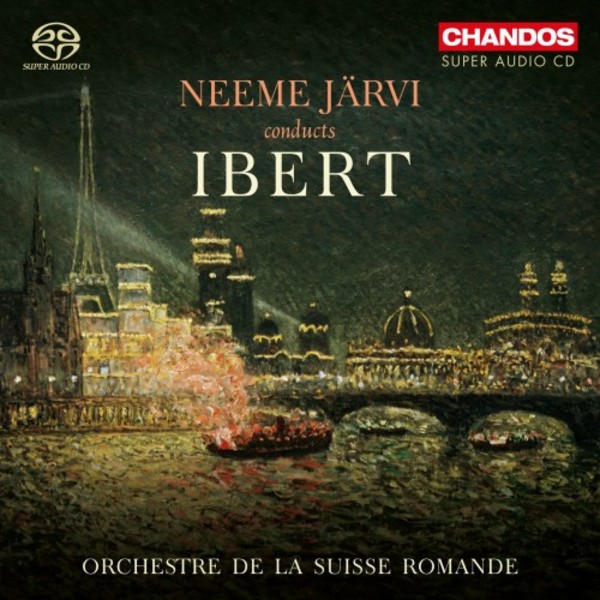 Neeme Järvi and the Orchestre de la Suisse Romande continue their exploration of French orchestral music with this fourth album: a merry collection from the best of the vigorously ebullient music of Jacques Ibert.

Among the numerous winners of the famous Prix de Rome between its institution by Napoleon in 1803 and its abandonment in 1968, the twentieth century provides us with repertoire works from only one composer: Jacques Ibert, whose characteristically clear orchestration is emphasised by strong melodic lines and supported by lively ostinato patterns in the bass. At the same time, the album reveals what an eclectic composer Ibert was. The contrast between his two best-known pieces is a perfect example: Divertissement, for small orchestra, is light-hearted, even frivolous; Escales..., on the other hand, is a ripely romantic work for large orchestra.

Like the previous recordings in this series, the unique acoustic of Genevas Victoria Hall is perfectly captured in surround sound on this SACD.

Poised between the French impressionism of Debussy and Ravel on the one hand and the Groupe des Six on the other, Jacques Ibert (1890-1962) retained his musical independence but was branded a mere eclectic for his troubles. Yet, as this generously-filled new disc from Chandos amply demonstrates, his gift for melody was matched by a skill as an orchestrator that equals any of his compatriots.

The programme gets off to a splendid start with the beautifully atmospheric Escales..... (Ports of Call, 1922), a Mediterranean travelogue composed in the wake of Iberts Prix de Rome triumph. From the impressionistic opening, via exotic North African melodies, to the concluding thinly-veiled reference to Chabriers España, this is a dazzling orchestral showpiece which strikes just the right balance between the opulent and the carefree, the disciplined and the relaxed.

The other well-known work here is the deliciously tongue-in-cheek Divertissement (1930), an adaptation by Ibert of his incidental music to Labiches farcical comedy Un Chapeau de paille dItalie. The high jinks get under way immediately, with a trombone glissando launching proceedings and piano and percussion lending a cabaret-like feel. Even the Cortège movement cant escape a mocking reference to Mendelssohns celebrated Wedding March, while the last two movements are a real riot. In a similar vein is the Suite symphonique Paris of the same year (another compilation from incidental music), skilfully evoking a variety of Parisian sights and sounds, from the Métro and a mosque to a restaurant in the Bois de Boulogne, once again ending in irrepressible high spirits.

Interlaced between these more substantial works is a selection of occasional and shorter pieces: the brilliantly scored Féerique (1924); the exquisite Sarabande pour Dulcinée (1932); the Ouverture de fête of 1940 (a kind of French Academic Festival Overture composed to mark 2,600 years of the Japanese empire); and a pair of 1956 compositions celebrating the Mozart bicentenary and the tenth anniversary of the BBC Third Programme (Bacchanale). The Hommage à Mozart features some immaculate rococo pastiche, while the Bacchanale was perhaps intended to cock a snook at the stuffy British - it certainly ends the disc in ebullient style.

Under the experienced baton of Neeme Järvi, the Orchestre de la Suisse Romande clearly have a whale of a time, and this is a worthy addition to Järvis popular series of recordings of the lighter repertoire, guaranteed to please. Attractive presentation, excellent liner notes from Roger Nichols, and a sumptuous recording made in Genevas Victoria Hall all add up to an irresistible package.

Järvi gives us a darker Divertissement than usual. The humour is mordant rather than breezy, the tone at times acerbic. But the shimmering Nocturne, with its poised piano solo, transports us into a sensual world more fully explored in Escales, and the latter gets one of its finest performances on disc, superbly nuanced, and quite exquisitely played. ... Ibert emerges from it all as a fine composer, whose unity lies in his almost impudent diversity, and who is often far from frivolous as some have maintained. And the disc allows Järvi to show off his Swiss orchestra to perfection. Very fine.  Tim Ashley
Gramophone May 2016