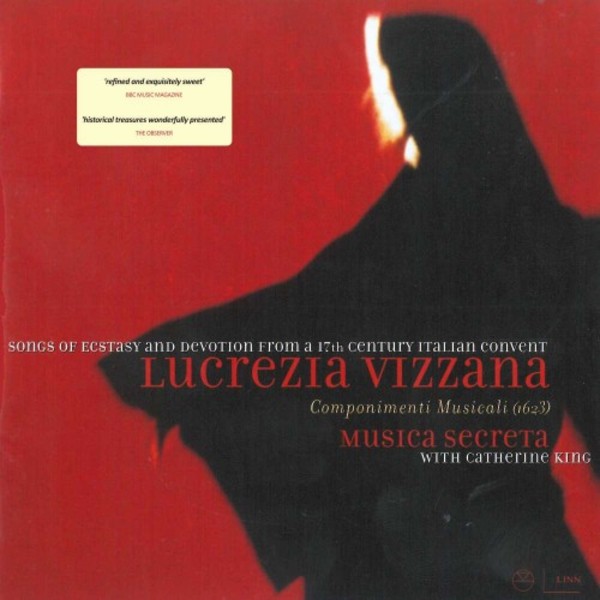 Re-released to coincide with International Women's Day on 8 March 2016, Songs of Ecstasy and Devotion celebrates the Italian composer Lucrezia Vizzana, whose musical accomplishments have been overlooked due to her gender.

Musica Secreta, an ensemble dedicated to discovering and performing repertoire by women composers, create an exquisite sound with a performance that provides a fascinating musical insight.

This recording features Vizzana's complete surviving works: twenty finely crafted motets which are both sensual and spiritual. Vizzana learnt her craft from the Italian masters of Bologna, often in secret, creating works reminiscent of Monteverdi.

The publication of Vizzana's Componimenti Musicali in 1623 was a remarkable achievement having overcome the confines of both her gender and the convent to achieve renown as a composer. Nearly four hundred years later women composers are still massively underrepresented throughout musical history, but Songs of Ecstasy and Devotion demonstrates why their voices should be more widely heard.

For over twenty five years, Musica Secreta has been at the forefront of the discovery and interpretation of music for and by early modern women. The ensemble brings together internationally-acclaimed musicians and ground-breaking research to perform this fascinating and continually emerging repertoire. Musica Secretas programmes illustrate the many faces of women musicians in the 16th and 17th centuries: courtiers, courtesans, actresses and cloistered nuns.

'There is no doubt about the integrity and intelligence of [the] performances, and the sound of the ensemble's female voices is refined and exquisitely sweet.' - BBC Music Magazine

'Were Botticelli's Primavera to burst into song, she would probably sound like this.' - Independent on Sunday

'The group's cast is a recommendation in itself.' - The Sunday Times